FACTOR: ONE NUMBER IS SAID TO BE A FACTOR WHEN IT DIVIDES THE OTHER NUMBER EXACTLY. THUS 3 AND 4 ARE FACTORS OF 12

Methods to find HCF
Method of prime factors: Break the given numbers into prime factors and then find the product of the prime factors common to all the numbers. This product will be the required HCF.
Example: HCF of  20, 35 and 45 is
20  =  2 × 2 × 5
35  =  5 × 7
45  =  3 × 3 × 5
The factor common to all the numbers is 5, hence 5 is the HCF.
Method of Division: Divide the greater number by the smaller number, if there is remainder then divide the divisor by the remainder, if again there is remainder, then again divide the divisor by the next remainder and so on until no remainder is left. The last remainder is the required HCF. 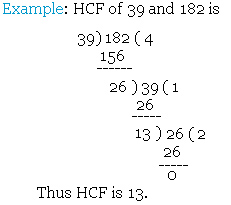 Regular method: Write all the given numbers in a line and divide them by a number which will exactly divide at least any two of the numbers. write down the quotients and the undivided numbers in a line below the first. Repeat the process until we get a line of numbers which are prime to each other. The product of all the divisors and the numbers in the last line will be the required LCM.
Example:
LCM of 8, 12 and 32 is