Introduction
Located in the north-western part of the South Asian subcontinent, Pakistan became a state as a result of the partition of British India on August 14, 1947. Pakistan annexed Azad (Free) Kashmir after the Indo-Pakistani War of 1947-48. Initially, Pakistan also included the north-eastern sector of the subcontinent, where Muslims are also in the majority. The East Wing and West Wing of Pakistan were, however, separated by 1,600 kilo meters of hostile Indian territory. The country's East Wing, or East Pakistan, became the independent state of Bangladesh in December 1971.

Boundaries of Pakistan
Pakistan occupies a position of great geostrategic importance, bordered by Iran on the west, Afghanistan on the northwest, China on the northeast, India on the east, and the Arabian Sea on the south. The total land area is estimated at 803,940 square kilo meters. 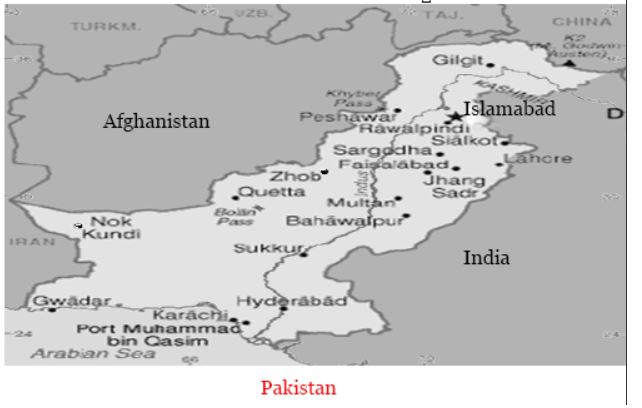 The boundary with Iran, some 800 kilo meters in length, was first delimited by a British commission in 1893, separating Iran from what was then British Indian Balochistan. In 1957 Pakistan signed a frontier agreement with Iran, and since then the border between the two countries has not been a subject of serious dispute.

Pakistan's boundary with Afghanistan is about 2,250 kilo meters long. In the north, it runs along the ridges of the Hindu Kush (meaning Hindu Killer) mountains and the Pamirs, where a narrow strip of Afghan territory called the Wakhan Corridor extends between Pakistan and Tajikistan. The Hindu Kush was traditionally regarded as the last north-western outpost where Hindus could venture in safety. The boundary line with Afghanistan was drawn in 1893 by Sir Mortimer Durand, then foreign secretary in British India, and was acceded to by the amir of Afghanistan that same year. This boundary, called the Durand Line, was not in doubt when Pakistan became independent in 1947, although its legitimacy was in later years disputed periodically by the Afghan government as well as by Pakhtun tribes straddling the Pakistan-Afghanistan border. On the one hand, Afghanistan claimed that the Durand Line had been imposed by a stronger power upon a weaker one, and it favoured the establishment of still another state to be called Pashtunistan or Pakhtunistan. On the other hand, Pakistan, as the legatee of the British in the region, insisted on the legality and permanence of the boundary. The Durand Line remained in effect in 1994.
In the north-eastern tip of the country, Pakistan controls about 84,159 square kilo meters of the former princely state of Jammu and Kashmir.

This area, consisting of Azad Kashmir (11,639 square kilo meters) and most of the Northern Areas (72,520 square kilometers), which includes Gilgit and Baltistan, is the most visually stunning of Pakistan. The Northern Areas has five of the world's seventeen highest mountains. It also has such extensive glaciers that it has sometimes been called the "third pole." The boundary line has been a matter of pivotal dispute between Pakistan and India since 1947, and the Siachen Glacier in northern Kashmir has been an important arena for fighting between the two sides since 1984, although far more soldiers have died of exposure to the cold than from any skirmishes in the conflict.

This line, about 770 kilometers long, was arranged with United Nations (UN) assistance at the end of the Indo-Pakistani War of 1947-48. The cease-fire line came into effect on January 1, 1949, after eighteen months of fighting and was last adjusted and agreed upon by the two countries in the Simla Agreement of July 1972. Since then, it has been generally known as the Line of Control.
The Pakistan-India boundary continues irregularly southward for about 1,280 kilometers, following the line of the 1947 Radcliffe Award, named for Sir Cyril Radcliffe, the head of the British boundary commission on the partition of Punjab and Bengal in 1947. Although this boundary with India is not formally disputed, passions still run high on both sides of the border. Many Indians had expected the original boundary line to run farther to the west, thereby ceding Lahore to India; Pakistanis had expected the line to run much farther east, possibly granting them control of Delhi, the imperial capital of the Mughal Empire.
The southern borders are far less contentious than those in the north. The Thar Desert in the province of Sindh is separated in the south from the salt flats of the Rann of Kutch by a boundary that was first delineated in 1923-24. After partition, Pakistan contested the southern boundary of Sindh, and a succession of border incidents resulted.

They were less dangerous and less widespread, however, than the conflict that erupted in Kashmir in the Indo-Pakistani War of August 1965. These southern hostilities were ended by British mediation, and both sides accepted the award of the Indo-Pakistan Western Boundary Case Tribunal designated by the UN secretary general. The tribunal made its award on February 19, 1968, delimiting a line of 403 kilometers that was later demarcated by joint survey teams. Of its original claim of some 9,100 square kilometers, Pakistan was awarded only about 780 square kilometers. Beyond the western terminus of the tribunal's award, the final stretch of Pakistan's border with India is about 80 kilometers long, running west and southwest to an inlet of the Arabian Sea.

Topology and Drainage
Pakistan is divided into three major geographic areas: The northern highlands; the Indus River plain, with two major subdivisions corresponding roughly to the provinces of Punjab and Sindh; and the Balochistan Plateau. Some geographers designate additional major regions. For example, the mountain ranges along the western border with Afghanistan are sometimes described separately from the Balochistan Plateau, and on the eastern border with India, south of the Sutlej River, the Thar Desert may be considered separately from the Indus Plain.

Nevertheless, the country may conveniently be visualized in general terms as divided in three by an imaginary line drawn eastward from the Khyber Pass and another drawn southwest from Islamabad down the middle of the country. Roughly, then, the  northern highlands are north of the imaginary east-west line; the Balochistan Plateau is to the west of the imaginary southwest line; and the Indus Plain lies to the east of that line.
The northern highlands include parts of the Hindu Kush, the Karakoram Range, and the Himalayas. This area includes such famous peaks as K2 (Mount Godwin Austen, at 8,611 meters the second highest peak in the world), and Nanga Parbat (8,126 meters), the twelfth highest. More than one-half of the summits are over 4,500 meters, and more than fifty peaks reach above 6,500 meters. Travel through the area is difficult and dangerous, although the government is attempting to develop certain areas into tourist and trekking sites. Because of their rugged topography and the rigors of the climate, the northern highlands and the Himalayas to the east have been formidable barriers to movement into Pakistan throughout history.
South of the northern highlands and west of the Indus River plain are the Safed Koh Range along the Afghanistan border and the Sulaiman Range and Kirthar Range, which define the western extent of the province of Sindh and reach almost to the southern coast.

The lower reaches are far more arid than those in the north, and they branch into ranges that run generally to the southwest across the province Balochistan. North-south valleys in Balochistan and Sindh have restricted the migration of peoples along the Makran Coast on the Arabian Sea east toward the plains.
Several large passes cut the ranges along the border with Afghanistan. Among them are the Khojak Pass, about eighty kilometers northwest of Quetta in Balochistan; the Khyber Pass, forty kilometers west of Peshawar and leading to Kabul; and the Baroghil Pass in the far north, providing access to the Wakhan Corridor.
Less than a one-fifth of Pakistan's land area has the potential for intensive agricultural use. Nearly all of the arable land is actively cultivated, but outputs are low by world standards. Cultivation is sparse in the northern mountains, the southern deserts, and the western plateaus, but the Indus River basin in Punjab and northern Sindh has fertile soil that enables Pakistan to feed its population under usual climatic conditions.
The name Indus comes from the Sanskrit word sindhu, meaning ocean, from which also come the words Sindh, Hindu, and India. The Indus, one of the great rivers of the world, rises in southwestern Tibet only about 160 kilometers west of the source of the Sutlej River, which joins the Indus in Punjab, and the Brahmaputra, which runs eastward before turning southwest and flowing through Bangladesh.

The catchment area of the Indus is estimated at almost 1 million square kilometers, and all of Pakistan's major rivers-the Kabul, Jhelum, Chenab, Ravi, and Sutlej-flow into it. The Indus River basin is a large, fertile alluvial plain formed by silt from the Indus. This area has been inhabited by agricultural civilizations for at least 5,000 years.
The upper Indus Basin includes Punjab; the lower Indus Basin begins at the Panjnad River (the confluence of the eastern tributaries of the Indus) and extends south to the coast. In Punjab (meaning the "land of five waters") are the Indus, Jhelum, Chenab, Ravi, and Sutlej rivers. The Sutlej, however, is mostly on the Indian side of the border. In the southern part of the province of Punjab, the British attempted to harness the irrigation power of the water over 100 years ago when they established what came to be known as the Canal Colonies. The irrigation project, which facilitated the emergence of intensive cultivation despite arid conditions, resulted in important social and political transformations.
Pakistan has two great river dams: the Tarbela Dam on the Indus, near the early Buddhist site at Taxila, and the Mangla Dam on the Jhelum, where Punjab borders Azad Kashmir. The Warsak Dam on the Kabul River near Peshawar is smaller.

These dams, along with a series of head works and barrages built by the British and expanded since independence, are of vital importance to the national economy and played an important role in calming the raging floodwaters of 1992, which devastated large areas in the northern highlands and the Punjab plains.
Pakistan is subject to frequent seismic disturbances because the tectonic plate under the subcontinent hits the plate under Asia as it continues to move northward and to push the Himalayas ever higher. The region surrounding Quetta is highly prone to earthquakes. A severe quake in 1931 was followed by one of more destructive force in 1935. The small city of Quetta was almost completely destroyed, and the adjacent military cantonment was heavily damaged. At least 20,000 people were killed. Tremors continue in the vicinity of Quetta; the most recent major quake occurred in January 1991. Far fewer people were killed in the 1991 quake than died in 1935, although entire villages in the North-West Frontier Province were destroyed. A major earthquake centred in the North-West Frontier Province's Kohistan District in 1965 also caused heavy damage.