Browsing also called Surfing the process of looking into the information available in the web. One of the preconditions for browsing is that you should be connected to the Internet.

For connecting to Internet one should have an Internet account with a service provider and you have done the connection settings on your computer relating to that account. Browser:

A Web browser is software application that enables one to find, retrieve, and display information available on the World Wide Web (WWW).

Browser also allows one to traverse information resources on the WWW.

As we know that the information on the Web is organized and formatted using tags of a Markup language called Hypertext Markup Language or HTML.

A web browser is converts the HTML tags and their content into a formatted display of information. Thus, a web browser allows you to see the rich web contents from a website. Some of the popular web browsers are - Internet Explorer, Mozilla Firefox, Apple Safari, Google Chrome, and Opera.

Internet is characterized by the Client Server Computing that consists of three basic components:

1. The Web client which may be the web browser.

2. The web server that services the request of the web client.

3. The network that connects the client and the servers through a network such as LAN, WAN or the Internet.

For exchanging information between the client and the server, an application level protocol Hypertext Transfer Protocol (HTTP) is used.

This protocol uses the services of TCP/IP for communication of reliable information over the internet.

However, HTTP is not suitable for all kinds of applications especially that requires large amount of data transfer in real time, for example, Voice over IP (VoIP) application which requires real time transfer of voice data.

Such protocols instead of reliable TCP may run over unreliable User Datagram Protocol (UDP).

The HTTP protocol allows us to access a web page by a web client running a browser. A Web page is a document or resource of information that may be available on a Web Server. 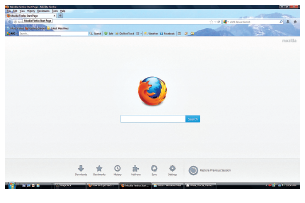 Description of buttons in a web browser:

It allows the user to view multiple web pages in the same browser without opening a new browser session.

It is also known as URL Bar is a place where the user can type the web page address that one want to retrieve from the web address.

It also displays the address of the web page currently being visited by the user.

This is also called as reload button. It reloads the current web page.

Back button can be used by the user for going back to the previously visited web page whereas the Forward button is used to visit the next page (if the user is not on the most recent page visited by him/her, this may happen when the user have pressed the back button at least once).

Home page is the first page of any web site. Home button will bring the user back to the home page of one’s website. 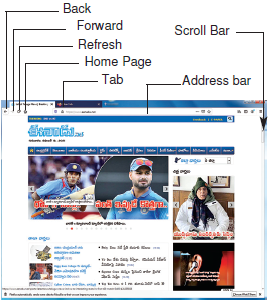 Search box allows any term to be searched by the search engine from the web. It can also used for searching contents from the website visiting.

In the late 1980s, a variety of technologies laid the foundation for World Wide Web by Sir Tim Berners-Lee.

The first graphical web browsers which led to explosion of web usage was developed in 1993 by under the leadership of Marc Andreessen. The browser was named NCSA Mosaic.

Netscape Navigator was the first very popular browser in 1994. It accounted for 90% of all web use at its peak.

Opera was started in 1996. It is presently one of the popular browsers on a mobile phone.

Firefox has evolved from Netscape. It was released in 2004. It is one of the popular browsers.

Apple Safari was developed in 2003. It is the main browser used in Apple machines.

Google Chrome was released in September, 2008. It is also becoming popular.

They typically use wireless infrastructure or Optical fiber connections to link their sites.

A MAN is optimized for a larger geographical area than a LAN, ranging from several blocks of buildings to entire cities.

MANs can also depend on communications channels of moderate-to-high data rates. A MAN might be owned and operated by a single organization, but it usually will be used by many individuals and organizations.

MANs might also be owned and operated as public utilities or privately owned. They will often provide means for internet working of local networks.

Metropolitan area networks can span up to 50km, devices used are modem and wire/cable.

Communication medium used for MAN are optical fiber cables, however it may use other media too.

The largest and most well-known example of a WAN is the Internet.

Many WANs are built for one particular organization and are private. Others, built by Internet service providers, provide connections from an organization's LAN to the Internet.

WANs are often built using leased lines. At each end of the leased line, a router connects to the LAN on one side and a hub within the WAN on the other.

Leased lines can be very expensive. Instead of using leased lines, WANs can also be built around public network or Internet.

A VPN may be defined as the secure way of connecting to your private LAN (such as your company network) from a remote location using the Internet or any other unsecure network.

In such a case, the data that is to be transmitted over the unsecure network is encrypted. In addition, VPNs have a proper mechanism for authenticating the user.

Communication medium used are satellite, public telephone networks which are connected by routers.

Routers forward packets from one to another on a route from the sender to the receiver. Identifying nodes in a networked

Each node in a network should be uniquely identified so that a network device can identify the sender and receiver and decide a routing path to transmit data.

MAC stands for Media Access Control. The MAC address, also known as the physical or hardware address, is a unique value associated with a network adapter called a NIC.

The MAC address is engraved on NIC at the time of manufacturing and thus it is a permanent address and cannot be changed under any circumstances.

The machine on which the NIC is attached, can be physically identified on the network using its MAC address.

Thus, if we know a computer’s IP address, we can communicate with that computer from anywhere in the world.

The initial IP Address called version 4 (IPV4 in short), is a 32 bit numeric address, written as four numbers separated by periods, whereeach number is the decimal (base-10) representation for an 8-bit binary (base-2) number and each can take any value from 0 - 255.