Directions (Q.1-5): Study the following graph carefully and answer the questions accordingly. Following graph shows the percentage profit of two companies A and B over the Years:

4. In which of the following years was the ratio of income to expenditure of company A, the minimum?
Ans: 2005
Explanation:
Ratio is minimum when the profit percent is minimum.

Directions (Q.11-15): Study the following table carefully to answer the questions that follow. Following table gives the production of Televisions of six companies A, B, C, D, E and F over the years.

11. During the year 2008, which company had the highest percentage of production over its total production for all the years together?
Ans: D
Explanation: 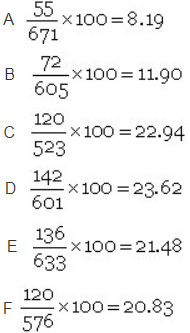 14. During which year company D had the lowest percentage of production over the total production of all the companies together?
Ans: 2009 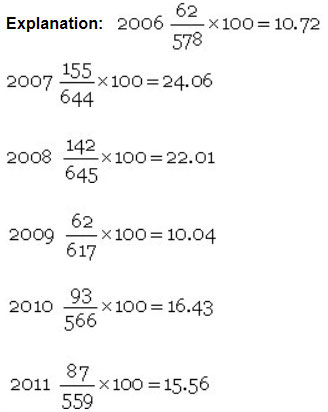