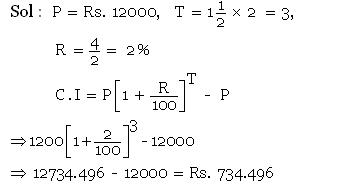 Sol: Let the money be Rs. x It becomes Rs. 2x in 3 years As this is compound interest, 2x will be the principal for next period. Therefore, 2x will become 4x in next

6. A sum of money invested at compound interest amounts to Rs.1664 at the end of first years and Rs.1730.56 at the end of second year. Find the rate of interest?

12. On what sum does the difference between Simple Interest and Compound Interest for 3 years at 5% rate be Rs.549?

13. When two equal amounts are deposited for 5 years and 3 years at the rate of 7% and 9% per annum respectively and the difference of their simple interest is Rs.475. Then find the deposited amount? (SSC-CGL 2019)

14. A certain sum of money triples itself in 5 years at simple interest. In how many years it will be five times? (SSC-CGL 2017)

15. A certain sum of money invested at compound interest doubles in 3 years. In how many years will it become 6 times itself?