2-b; Let the normal speed of the train be x and actual time taken be t.
Total distance = x t 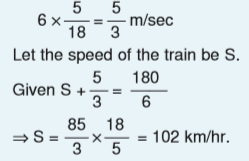 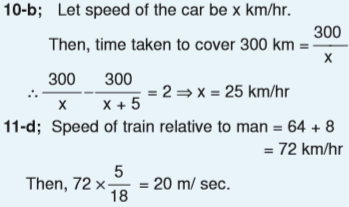 13-c; Let the length of the train be x metres. When a train crosses a platform it covers a distance equal to the sum of lengths of train and platform. Also, the speed of train is same. 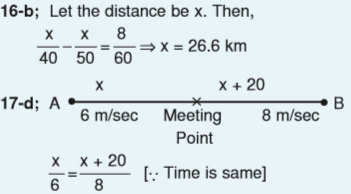 4. The ratio of lengths of two trains is 3 : 2. The speeds of the trains are 20 kmph and 30 kmph respectively. The time taken to cross each other, when they are travelling in opposite directions is 36 sec. Find the length of longer train.
A: 300

6. Two trains running in opposite directions can cross a man, who is standing on a platform in 52 sec and 38 sec respectively and both the trains can cross each other in 44 sec. Find the ratio of the speeds.
A:  3 : 4

8. The distance between Ongole and Tirupathi is 480 km. One train leaves Ongole to Tirupathi at 65 kmph and another leaves Tirupathi to Ongole at 55 kmph. Find the distance of the point where the two trains meet from Ongole and the time taken to meet each other.
A:  260 km, 4h

9. A train can cross two persons who are travelling at speeds of 3 kmph and 6 kmph in opposite direction to the train in 36 sec and 30 sec respectively. Find the length of the train.
A:  150 m

13. A train consists of 12 bogies (inclusive of the engine). Each bogie is 15 m long. The train crossed a telegraph post in 18 seconds. Due to some problem two bogies were detached. Moving at the same speed the train now crossed the telegraph post in?
A:   15 sec

14. Two trains of equal length take 10 seconds and 15 seconds respectively to cross a telegraph post. If the length of each train be 120 metres, in what time (in seconds) will they cross each other travelling in opposite
direction?
A:   12

16. Two identical trains A and B running in opposite direction at same speed take 2 min to cross each other completely. The number of bogies of A are increased from 12 to 16. How much more time would they now require to cross each other?
A:   20 sec

17. Two metro trains each 120 m long are moving in opposite directions. They cross each other in 12 seconds. If one is moving thrice as fast as the other, what is the speed of the faster metro train?
A: 54 km/ hr

18. A train can travel 50% faster than a car. Both start from point A at the same time and reach point B 60 kms away from A at the same time. On the way, however, the train lost about 15 minutes while stopping at the stations. The speed of the car is...
A: 80 km/ hr 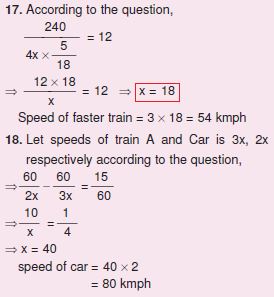