We use question tags to make a statement or argument sound polite by asking a question. We often use question tags at the end of a sentence to confirm if something is true, or to ask for another person's response in a conversation. To form a question tag, we can combine some modal verbs or auxiliary verbs with the subject that the verb is referring to.

Some rules to follow for the formation of Question tags:

Rule 1: Always form the question tag as per the main part of the sentence.

E.g.: ‘I think she is beautiful, isn’t she?’
We have 2 parts here to form a question tag here.
i. I think, and
ii. she is.
Here, the phrase ‘she is’ is the main part of the sentence. So, we use question for that phrase (isn’t she).

Rule 2: In question tags, collective noun takes a singular verb and singular pronoun.
Examples:
i. The jury has given its verdict, hasn't it?
ii. The class hasn’t selected its leader, has it?
iii. Our cricket team has played very well, hasn't it?
Note: If the collective noun is not treated as one unit in a statement, we use plural verb and plural pronoun in the question tag.
E.g.: The team have to arrange money for their own expenses, haven't they?

Rule 4: Some words such as hardly, seldom, scarcely, barely, carry negative meaning. So, we use positive question tags for those words.
Examples:
i. He hardly does any work, does he?
ii. I found barely anything to eat, did I?
iii. They seldom come, do they?
iv. He is never available, is he?
v. She scarcely remembers to feed the dog, does she?

Rule 5: For sentences having modal auxiliaries such as can, could, will, would, may, might, must, shall, should, ought to, need, would rather, had better, dare, the question tags will be shall not, will not, won't, can't etc. depending on whether positive or negative tag is needed for the sentence.
Examples:
i. Everybody should wear a seat belt while driving, shouldn't they?
ii. A healthy body can achieve the impossible, can't it?
iii. Water animals can breathe under water, can't they?
iv. A student should be regular in studies, shouldn't he?
v. Everybody cannot drive, can they?

ii. How big the slide is! Isn't it?
iii. How nicely the bird sings! Isn't it?

Rule 8: The words such as moon, earth, river, motherland, country, ship, train are treated as feminine gender. So, we use pronoun ‘she’ in the question tags. We can also use the pronoun ‘it’ sometimes as per usage.
Examples:
i. The Titanic was thought to be unsinkable, wasn't she?
ii. India has never attacked any country, has she?

Rule 10: If a sentence starts with the words such as there, one, this, that, these, those etc. then the pronoun for the question tag used should be there, one, this, that, these, those etc. respectively.
Examples:
i. There is a book on the table, Isn't there?
ii. One cannot find a solution to this problem, Can one?
iii. That is my book, isn’t that? 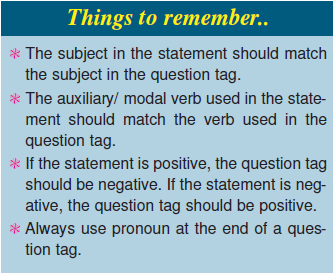