Reasoning tests your anlytical and mental ability. This is a high scoring section but the questions often take time to get solved. Solving questions based on reasoning require lot of concentration and decision making ability. This section usually includes questions on number series, logical problems, blood relations etc.
Directions (Q.1-4): Read the following information and answer the questions given below:
i. P, Q, R, S and T finished the work, working from Monday to Saturday, one of the days being a holiday, each working overtime only on one of the days.
ii. R and T did not work over time on the first day.
iii. Q worked overtime the next day after the holiday.
iv. The overtime work done on the previous day of the holiday was by R.
v. There was a two days gap between the days on which P and Q worked overtime.
vi. P worked overtime the next day of the over time day of S.

1. When did T work overtime?
Ans. On the next day of the day on which Q worked overtime.

2. How many day's gap was there between the days on which P and T worked overtime ?
Ans. Three 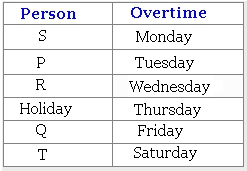 10. How many meaningful English words can be made with the letters TEBI using each letter only once in each word?
Ans. One
Explanation : BITE

Directions(Q.11-15): Read the following information and answer the questions given below:
i. A, B, C, D, E, F and G are sitting along a circle facing at the centre and are playing cards.
ii. E is the neighbour of A and D.
iii. G is not between F and C.
iv. F is on the immediate right of A.
11. Who are the neighbours of B?
Ans. F and C

12. Which pair given below has the second person sitting immediately to the right of the first?
Ans. EA

19. '2YS' is to 'EG£' in the same way as 'PHK' is to
Ans. @WL
Explanation : If you put a mirror after the third element of the first team, the points of reflection constitute the second term.