A range of human activities threatens these species—intense maritime traffic, urban pollutants, and oil and gas exploration. By analyzing cetacean behaviour in this high-pressure environment, oceanographers hope to protect Pelages’ marine species and promote their importance to the surrounding coastal community.  To get a clear picture of these species and their behaviour, oceanographers monitor their geographic position, movements, and group size. They record vocalizations, respiration patterns, and surface and aerial displays to understand how cetaceans interact with one another and other marine species. Skin and focal samples are analyzed to generate information on social, sexual, and feeding habits. The Cetacean Sanctuary Research Project has collected one the largest data sets on marine mammals in the Mediterranean Sea. 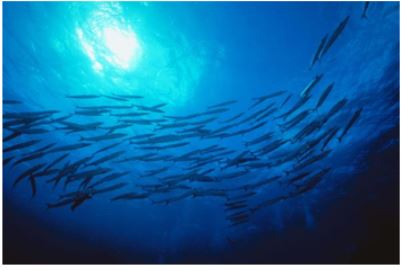 New technology is expanding opportunities for biological oceanographers. Marine biotechnology is the study of how marine resources can be used to develop industrial, medical, and ecological products. Using a process called bio mimicry, researchers are able to understand, isolate, and fabricate biological properties of marine species. Natural compounds found in corals and other marine organisms have potent anti-cancer properties. Proteins found in marine algae and bacteria are being developed into super-absorbent materials that could be used to clean oil spills. Salt-tolerant land crops have been created from genetically engineered marsh plants.
The real-world applications of this research are potentially endless because marine species make up more than 80 percent of Earth’s living organisms.

B. Chemical oceanography (marine chemistry), which studies the chemistry of the oceans, both past and present, and the way it interacts with the atmosphere and the carbon cycle.
Chemical oceanographers study the chemical composition of seawater and its resulting effects on marine organisms, the atmosphere and the seafloor. They map chemicals found in seawater to understand how ocean currents move water around the globe—the ocean conveyor belt. 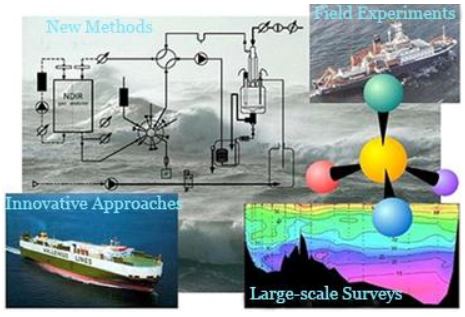 Climate change
Human activities, such as fossil fuel combustion, biomass burning, and agriculture, release large amounts of carbon dioxide and other gases that influence climate into the atmosphere. As the atmospheric carbon dioxide level rises, both scientific and societal concerns grow over potential greenhouse warming and climate change. An important fraction of the carbon dioxide released into the atmosphere by human activities ends up in the ocean; without the oceans, atmospheric carbon dioxide levels would be even higher than they are today.
Much research in chemical oceanography focuses on quantifying the ocean's rate of uptake of carbon dioxide and understanding the biological pump by which the carbon dioxide that enters the surface ocean is transferred to deep waters and sediments, to be sequestered from the atmosphere for millennia.
Some focal points of current research at WHOI and MIT are:
* Applying new physical and chemical measurements to the study of the air-sea boundary layer.
The result? Direct gas exchange estimates and new information on boundary layer properties that can be used by modellers to apply satellite-based measurements to the determination of ocean-wide air-sea gas exchange.
* Developing chemical and molecular techniques for understanding the controls on the photosynthetic activities of organisms living in the surface ocean.
These developments are coupled to the continual improvement of instruments that, when mounted on floating buoys, can make continuous, at-sea measurements.
* Improving and deploying instruments to measure the rain of particles from the surface to the deep ocean and to understand the processes that alter the particles during their transit.

These efforts have led to improvements in sediment traps so they can capture representative samples of falling particles and to the development of in situ pumps to capture suspended particles.
* Incorporating new chemical sensors and new technologies into instruments designed to sample marine sediments and to measure the composition of the waters contained in them.
These developments are driven by an increasing recognition that sampling of sedimentary pore waters must be carried out in situ, on the sea floor—a requirement that challenges even the most innovative engineers.
* Understanding past, abrupt climate change can provide key insights into what may await us in the future.
Scientists at WHOI and MIT are developing tools for investigating past changes. Organic geochemists exploit knowledge of specific biochemical pathways and advances in analytical instrumentation to develop chemical and isotopic tracers of biogeochemical processes and seawater characteristics that have changed over time.
New developments in mass spectrometry are allowing more types of measurements on more types of samples than ever before, thereby helping investigators to continually broaden the scope of the study of past climate change.

* Tracing the pathways of anthropogenic emissions through the oceans (for example, bomb fallout tritium, carbon-14, and plutonium, Chernobyl and Fukushima radio nuclides, anthropogenic lead and mercury, and organic pollutants such as PAH (polycyclic aromatic hydrocarbons)
As well as establishing the anthropogenic footprint upon the ocean, these studies help us to estimate transport times and mechanisms that move these substances through the ocean. 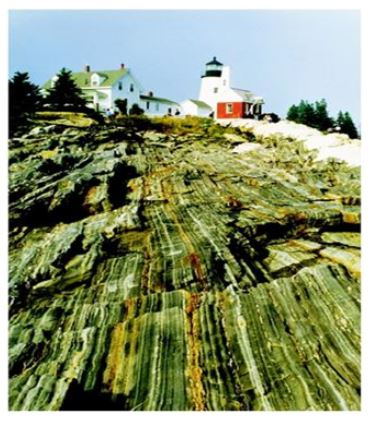 Seismic techniques are used to measure the subsurface structure. This type of study is carried out by teams of two ships: one fires an explosive in the water and the other uses sensitive instruments to record the sound waves as they reach the second ship. Some waves travel directly to the second ship; others travel to the ocean floor, are refracted (bent) within the layers of sediment, and then travel to the second ship.
By measuring the time it takes for the energy to arrive and the distance between the boats, the thickness of sediments and other features can be determined. Structures may also be analyzed by studying natural earthquake waves that travel through deeper oceanic rocks and may be recorded at stations around the world.

Geological oceanography and coastal geology are closely related yet distinct disciplines. Geological oceanographers study the rocks and structure of the ocean floor, the ocean floor sediment that covers them, and the processes that formed them. Coastal geologists focus on these structures and processes in a coastal environment (shown here).
Other ways oceanic sediments are studied are by dredging processes and deep-sea exploration projects such as the Ocean Drilling Program (ODP), which obtains samples of seafloor sediment from the entire world. The ocean sediments are found to consist of rock particles and organic remains whose compositions depend on depth, distance from continents, and local variations such as submarine volcanoes or high biological activity. For example, clay minerals, which are formed by the weathering of continental rocks, are carried out to sea by rivers and are usually abundant in the deep sea. Thick deposits of weathered rock material, commonly coarser than deep-sea clays, are often found near the mouths of rivers and on the continental shelves.

D. Physical oceanography (marine physics), studying the physics of the oceans, including the complex ways that light, sound, and radio waves traverse the ocean. Oceanography is also heavily used in ocean engineering, commercial or scientific ventures involving the construction of oil platforms, ships, harbours, and maybe in the future, floating cities.

Physical oceanography is the study of the physics of the ocean. This encompasses a very broad range of processes that can be characterized by the time and space scales over which they vary. On the rapidly varying end of the scale, there are turbulent eddies with durations of seconds and spatial scales of centimetres. At somewhat longer scales, there are propagating surface and internal gravity waves with periods of seconds to hours and wavelengths of meters to kilometres. Astronomical forces generate tides which propagate on the rotating earth as waves with periods predominantly near 12 and 24 hours and wavelengths of thousands of kilometres. At intermediate scales, there are horizontal eddies, fronts and coastal currents that vary on time scales of days to months and spatial scales of one to hundreds of kilometres. At the slowly varying end of the scale there are wind-forced and thermodynamically driven ocean currents with time scales of days to centuries and spatial scales of tens to thousands of kilometres. Transfers of momentum, heat and salt occur within the ocean and across the air-sea interface on all of these space and time scales.
One of the intriguing aspects of physical oceanography is the overlap and interaction between the various physical processes. For example, processes that occur on very short and intermediate scales determine the water motion, temperature, salinity and other properties on very large scales.

Large-scale water properties in the ocean are mixed by turbulent eddies that occur on vertical scales of centimetres and seconds and horizontal scales of kilometres and days. Vertical turbulent mixing can be enhanced by the cascade of energy from internal gravity waves that have vertical and horizontal scales of tens of meters and hours. A primary mechanism for the generation of internal waves is the interaction of ocean tides with bottom topography. It is thus apparent that a comprehensive understanding of the large-scale ocean circulation requires consideration of the full range of physical processes occurring in the ocean.
And the relationship between the ocean’s physical properties, the atmosphere, and the seafloor and coast. They investigate ocean temperature, density, waves, tides, and currents. They also focus on how the ocean interacts with Earth’s atmosphere to produce our weather and climate systems.
Oceanographers in South Africa, for example, have studied the turbulent flow of water around the southern tip of Africa. This movement, known as the Agulhas Current, is part of a larger “ocean conveyor belt” that circulates water around the globe based on density, wind, and currents. Physical oceanographers have found that the amount of water flowing from the Indian Ocean to the Atlantic Ocean has increased; a process nicknamed the Agulhas leakage. The increased Agulhas leakage has been linked to global warming.
Physical oceanographers predict that global warming will slow the ocean conveyor belt and radically change climate and weather patterns. As ice caps melt, sea levels rise and the ocean become less salty and dense. As ocean waters warm, they also expand, which enhances sea level rise.

Temperature, Salinity, Density: Because the vast majority of the world ocean's volume is deep water, the mean temperature of seawater is low; roughly 75% of the ocean's volume has a temperature from 0° – 5°C (Pinet 1996). The same percentage falls in a salinity range between 34–35 ppt (3.4–3.5%) (Pinet 1996). There is still quite a bit of variation, however. Surface temperatures can range from below freezing near the poles to 35°C in restricted tropical seas, while salinity can vary from 10 to 41 ppt (1.0–4.1%).
The vertical structure of the temperature can be divided into three basic layers, a surface mixed layer, where gradients are low, a thermo cline where gradients are high, and a poorly stratified abyss.
In terms of temperature, the ocean's layers are highly latitude-dependent; the thermo cline is pronounced in the tropics, but nonexistent in polar waters (Marsha 2001).

The halocline usually lies near the surface, where evaporation raises salinity in the tropics, or melt water dilutes it in polar regions. These variations of salinity and temperature with depth change the density of the seawater, creating the pycnocline.