Dwarf planets are round and orbit the Sun just like the eight major planets. But unlike planets, dwarf planets are not able to clear their orbital path so there are no similar objects at roughly the same distance from the Sun. A dwarf planet is much smaller than a planet (smaller even than Earth's moon), but it is not a moon. Pluto is the best known of the dwarf planets.
Need-to-know things about Dwarf Planets:
1. If the sun were as tall as a typical front door, Earth would be the size of a nickel and dwarf planets Pluto and Eris. For example, would each be about the size of the head of a pin. 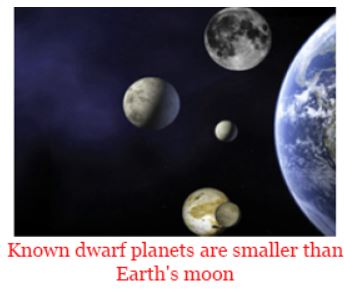 2. Dwarf planets orbit our sun, a star. Most are located in the Kuiper Belt, a region of icy objects beyond the orbit of Neptune. Pluto, one of the largest and most famous dwarf planets, is about 5.9 billion km or 39.48 AU away from the sun. Dwarf planet Ceres is in the main asteroid belt between Mars and Jupiter.
3. Days and years vary on dwarf planets. One day on Ceres. For example, takes about nine hours (the time it takes for Ceres to rotate or spin once). Ceres makes a complete orbit around the sun (a year in Ceresian time) in about 4.60 Earth years
4. Dwarf planets are solid rocky and/or icy bodies, The amount of rock vs. ice depends on their location in the solar system.
5. Many, but not all dwarf planets have moons.
6. There are no known rings around dwarf planets.
7. Dwarf planets Pluto and Eris have tenuous (thin) atmospheres that expand when they come closer to the sun and collapse as they move farther away. It is possible dwarf planet Ceres has an atmosphere.
8. The first mission to a dwarf planet is Dawn (to Ceres).
9. Dwarf planets cannot support life as we know it.
10. Pluto was considered a planet until 2006. The discovery of a similar-sized worlds deeper in the distant Kuiper Belt sparked a debate that resulted in a new official definition of a planet that did not include Pluto.