Our moon makes Earth a more livable planet by moderating our home planet's wobble on its axis, leading to a relatively stable climate, and creating a tidal rhythm that has guided humans for thousands of years. The moon was likely formed after a Mars-sized body collided with Earth and the debris formed into the most prominent feature in our night sky.
Need-to-know things about Earth's Moon:
1. If the sun were as tall as a typical front door, Earth would be the size of a nickel and the moon would the size of a green pea. 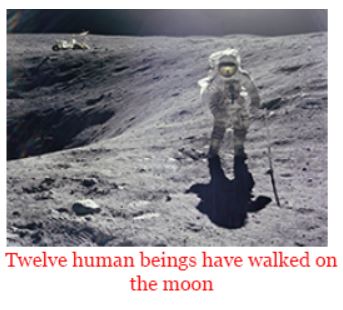 2. The moon is Earth's satellite and orbits the Earth at a distance of about 384 thousand km or 0.00257 AU.
3.The moon makes a complete orbit around Earth in 27 Earth days and rotates or spins at that same rate, or in that same amount of time. This causes the moon to keep the same side or face towards Earth during the course of its orbit.
4. The moon is a rocky, solid-surface body, with much of its surface cratered and pitted from impacts.
5. The moon has a very thin and tenuous (weak) atmosphere, called an exosphere.
6. The moon has no moons.
7. The moon has no rings.

8. More than 100 spacecraft been launched to explore the moon. It is the only celestial a body beyond Earth that has been visited by human beings (The Apollo Program).
9. The moon's weak atmosphere and its lack of liquid water cannot support life as we know it.
10. Surface features that create the face known as the "Man in the moon" are impact basins on the moon that are filled with dark basalt rocks.
The regular daily and monthly rhythms of Earth's only natural satellite, the moon, have guided timekeepers for thousands of years. Its influence on Earth's cycles, notably tides, has been charted by many cultures in many ages. The moon moderates Earth's wobble on its axis, leading to a relatively stable climate over billions of years. From Earth, we always see the same face of the moon because the moon is spinning on its axis at the same speed that it is going around Earth (that is, it is in synchronous rotation with Earth).
The light areas of the moon are known as the highlands. The dark features, called maria (Latin for seas), are impact basins that were filled with lava between 4.2 and 1.2 billion years ago. These light and dark areas represent rocks of different composition and ages, which provide evidence for how the early crust may have crystallized from a lunar magma ocean. The craters themselves, which have been preserved for billions of years, provide an impact history for the moon and other bodies in the inner solar system.

The leading theory of the moon's origin is that a Mars-sized body collided with Earth approximately 4.5 billion years ago, and the resulting debris from both Earth and the impactor accumulated to form our natural satellite. The newly formed moon was in a molten state. Within about 100 million years, most of the global "magma ocean" had crystallized, with less-dense rocks floating upward and eventually forming the lunar crust. The early moon may have developed an internal dynamo, the mechanism for global magnetic fields for terrestrial planets.