1. Ahmedabad(Gujarat) - Cotton Textile: The textile industry of the city of Ahmedabad in the state of Gujarat in India dates back to the 19th century, when the city and the industry was established under the British Raj. Textile mills employed thousands of people from across the state, and the cotton garments manufactured were exported across the world. The prosperity of the industry was the mainstay of the city's economy. It is called the Manchester of India. 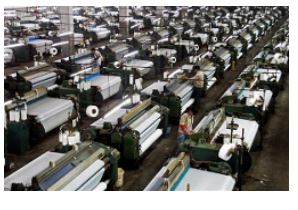 The Arvind Mills is a company that processes denim for jeans worldwide, it is located near the Sabarmati river; as such the water required for the textile industry is easily available. The black soil found abundantly in Gujarat is best suited for the cultivation of cotton which is mostly required for the industry.

Another major company in Ahmedabad is Ashima group. Electricity and cheap labour are available in abundance. Ahmedabad stands very near to the sea and as such export and import becomes easy.

2. Agra (U.P) - Leather, Marble: Agra has many industries. Uttar Pradesh's first plant biotech company Harihar Biotech is located near the Taj. It is one of the largest plant tissue culture laboratories in North India with an annual production capacity of 2 million plants. There are about 7,000 small scale industrial units. 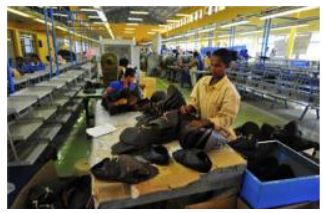 Agra is known for its sweets (Petha and Gajak) and snacks (Dalmoth), garment manufacturers and exporters and an automobile industry. Carpet making was introduced to the city by Moghul Emperor Babur and since then this art has flourished. Some leading exporters of carpets in Agra are Karan Exports, The Rug Factory, Agarwal Brothers, Rugs International, Floor Artists Inc.

3. Baku (Russia) - Petroleum: Baku is a city founded upon oil, for to its inexhaustible founts of naphtha it owes its very existence, its maintenance, its prosperity. At present Baku produces one-fifth of the oil that is used in the world, and the immense output in crude petroleum from this single city far surpasses that in any other district where oil is found. Verily, the words of the Scriptures find illustration here: 'the rock poured me out rivers of oil.

4. Bengaluru - Aircraft and Telephones: Two important developments which contributed to the rapid growth of the city, include the introduction of telegraph connections to all major Indian cities in 1853, and a rail connection to Madras in 1864.

5. Bhilai (Chhattisgarh) - Steel Plant: The Bhilai Steel Plant, located in Bhilai, in the Indian state of Chhattisgarh, is India's first and main producer of steel rails, as well as a major producer of wide steel plates and other steel products. The plant also produces and markets various chemical by-products from its coke ovens and coal chemical plant. It was set up with the help of the USSR in 1955. 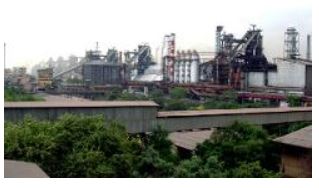 The eleven-time winner of the Prime Minister's Trophy for best integrated steel plant in the country, Bhilai Steel Plant (BSP), has been India's sole producer of rails and heavy steel plates and major producer of structural steel. The plant is the sole supplier of the country's longest rail tracks, which measure 260 metres. The plant also produces products such as wire rods and merchant products. Bhilai Steel Plant has been the flagship integrated steel plant unit of the Public Sector steel company, the Steel Authority of India Limited and is its largest and most profitable production facility. It is the flagship plant of SAIL, contributing the largest percentage of profit.

6. Bangkok (Thailand) - Ship-Building,Teak and Wood: Teak in Thailand is found extensively in the north and stretches along the western border down to latitude 14°N, i.e. the whole range extends from 14°N to 20°31" N and west to east longitude 97°30"E to 104°30"E at altitudes between 100-900 m above mean sea level (Mahaphol, 1954). Teak was associated with other species in the mixed deciduous forest, which at that time was estimated at 9,297,300 ha. It was assumed that approximately one-fourth of the forest land was under teak, i.e. the teak-bearing area was 2,324,300 ha. A number of factors control the distribution and growth of teak, including rainfall/soil moisture, temperature, light, geographical formation, and soil conditions.

7. Bhagalpur (Bihar) - Silk: Bhagalpur is known silk city as it is famous world wide for its silk production. The silk industry in this city is 200 of years old and a whole clan exist that has been producing silk for generations. Bhagalpur is well known for its sericulture, manufacture of silk yarn and weaving them into lovely products. This silk is of a distinct and special type. It is known as Tussah or Tusser Silk. Bhagalpur silk is a household name in India and the lovers of Bhagalpur silk fabrics is found allover the India.