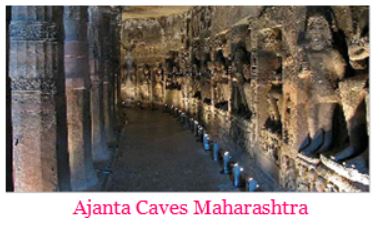 The Ajanta Caves in Aurangabad district of Maharashtra, India are about 30 rock-cut Buddhist cave monuments which date from the 2nd century BCE to about 480 or 650 CE. The caves include paintings and sculptures described by the government Archaeological Survey of India as "the finest surviving examples of Indian art, particularly painting", which are masterpieces of Buddhist religious art, with figures of the Buddha and depictions of the Jataka tales.
The caves were built in two phases starting around the 2nd century BCE, with the second group of caves built around 400 – 650 CE according to older accounts, or all in a brief period of 460 to 480 according to the recent proposals of Walter M. Spink. The site is a protected monument in the care of the Archaeological Survey of India, and since 1983, the Ajanta Caves have been a UNESCO World Heritage Site.

Akbar’s Tomb
The Tomb of Akbar the Great is an important Mughal architectural masterpiece, built 1605 – 1613, set in 48 Ha (119 acres) of grounds in Sikandra, a suburb of Agra, Uttar Pradesh, India. The third Mughal Emperor Akbar the Great (1555 – 1605), himself commenced its construction in around 1600, according to Tartary tradition to commence the construction of one's tomb during one's lifetime. Akbar himself planned his own tomb and selected a suitable site for it. After his death, Akbar's son Jahangir completed the construction in 1605 - 1613. Akbar was one of the greatest emperors in the history of India.

Amarnath Cave
Amarnath cave is a Hindu shrine located in Jammu and Kashmir, India. It is dedicated to Shiva. The cave is situated at an altitude of 3,888 m (12,756 ft), about 141 km (88 mi) from Srinagar, the capital of Jammu and Kashmir and reached through Pahalgam town. The shrine forms an important part of Hinduism, and is considered to be one of the holiest shrines in Hinduism. The cave is surrounded by snowy mountains. The cave itself is covered with snow most of the year except for a short period of time in summer when it is open for pilgrims. Thousands of Hindu devotees make an annual pilgrimage to the Amarnath cave on challenging mountainous terrain to see an ice stalagmite formed inside the cave. 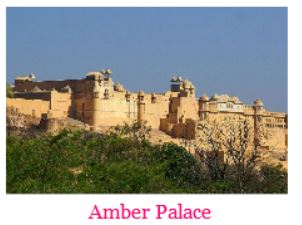 Amber palace is located in Amer (a town with an area of 4 square kilometres (1.5 sq mi), 11 kilometres (6.8 mi) from Jaipur, Rajasthan state, India. It is one of the principal tourist attractions in the Jaipur area, located high on a hill. Amber Fort was built by Raja Man Singh I.

Anand Bhavan:
The Anand Bhavan is a historic house museum in Allahabad, India focusing on the Nehru-Gandhi Family. It was constructed by Indian political leader Motilal Nehru in the 1930s to serve as the residence of the Nehru family when the original mansion Swaraj Bhavan (previously called Anand Bhavan) was transformed into the local headquarters of the Indian National Congress.
Jawahar Planetarium, the famous planetarium is situated here, which has been striving to inculcate scientific temper among masses through its sky shows on astronomy and science. Anand Bhavan was donated to Indian government in 1970 by Indira Gandhi.

Bhakra Dam
Bhakra Dam is a concrete gravity dam across the Sutlej River, and is in Bilaspur, Himachal Pradesh in northern India. The dam, located at a gorge near the (now submerged) upstream Bhakra village in Bilaspur district of Himachal Pradesh, is India's tallest at 225. The length of the dam (measured from the road above it) is 518.25 m; it is 9.1 m broad. Its reservoir, known as the "Gobind Sagar", stores up to 9.34 billion cubic metres of water, enough to drain the whole of Chandigarh, parts of Haryana, Punjab and Delhi. The 90 km long reservoir created by the Bhakra Dam is spread over an area of 168.35 km2. In terms of storage of water, it withholds the third largest reservoir in India, the first being Indira Sagar Dam in Madhya Pradesh with capacity of 12.22 billion cu.m and second Nagarjunasagar Dam.
Described as "New Temple of Resurgent India" by Jawaharlal Nehru, the first prime minister of India, the dam attracts tourists from all over India. Nangal dam is another dam downstream of Bhakra dam. Sometimes both the dams together are called Bhakra-Nangal dam though they are two separate dams. 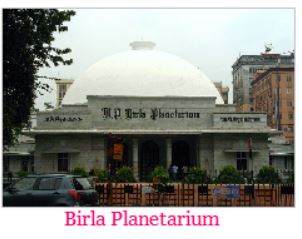 It has an astronomy gallery that maintains a huge collection of fine paintings and celestial models of renowned astronomers. The Planetarium also has an astronomical observatory equipped with a Celestron C-14 Telescope with accessories such as ST6 CCD camera and solar filter. It offers to the public and students more than 100 astronomical projects dealing with various facts of astronomy, astro-physics, Space Science as well as myths concerning stars and planets. It has a capacity of 680.

Island palace
Lake Palace is a luxury hotel, which has 83 rooms and suites featuring white marble walls. The Lake Palace is located on the island of Jag Niwas in Lake Pichola, Udaipur, India, and its natural foundation spans 4 acres (16,000 m2). The hotel operates a speed boat which transports guests to the hotel from a jetty at the City Palace. It has been voted as the most romantic hotel in India and in the world.

Jagannath temple
The Jagannath Temple in Puri is a famous, sacred Hindu temple dedicated to Jagannath and located on the eastern coast of India, at Puri in the state of Odisha. The name Jagannath comes from the word Jagat-Nath which means 'Lord of the Universe. In Jagannath, the ‘t’ becomes an ‘n’ to mean lord (nath) of the universe. And also, the word "Jagannatha" is evolved from "Jagati" and "Natha". Even in the western language, there exists a word 'juggernaut' that means once a person or artefact gets going, it cannot be stopped, thrashing all that comes in its way. The temple is an important pilgrimage destination for many Hindu traditions, particularly worshippers of Krishna and Vishnu, and part of the Char Dham pilgrimages that a Hindu is expected to make in one's lifetime. Even though most Hindu deities that are worshiped are made out of stone or metal, the image of Jagannath is wooden. Every twelve years these wooden figures are ceremoniously replaced by using sacred trees, that have to be carved as an exact replica. The reason behind this ceremonial tradition is the highly secret Navakalevara ceremony, an intricate set of rituals that accompany the renewal of the wooden statues.
The temple was built in the 12th century atop its ruins by the progenitor of the Eastern Ganga dynasty, King Anantavarman Chodaganga Deva. The temple is famous for its annual Rath Yatra, or chariot festival, in which the three main temple deities are hauled on huge and elaborately decorated temple cars. Since medieval times, it is also associated with intense religious fervour. The temple is sacred to the Vaishnava traditions and saint Ramananda who was closely associated with the temple. It is also of particular significance to the followers of the Gaudiya Vaishnavism whose founder, Chaitanya Mahaprabhu, was attracted to the deity, Jagannath, and lived in Puri for many years.

Vijay Stambha
Vijay Stambha or "Tower of Victory" is an imposing structure located in Chittorgarh fort in Rajasthan, India. This tower is the piece-de-resistance of Chittaurgarh. It was constructed by Mewar king Rana Kumbha between 1442 AD and 1449 AD to commemorate his victory over the combined armies of Mewar and Gujarat led by Mahmud Khilji. Dedicated to Vishnu, this 37.19 m high 9 storied towers is one of the most remarkable in India. It is built partly of red sand stone and partly of white marble and is enriched by numerous images of Hindu gods and goddesses with inscriptions at bottom of each.  It is believed that the tower took 10 years to be completed. This exemplary piece of architecture stands on a pedestal 10 feet high. Each of the nine stories are distinctly marked with openings and balconies at every face of each storey. The interior staircase winds alternately through the central chamber and surrounding gallery.
The inscribed slabs in the uppermost storey contain genealogy of the rulers of Chittaur from Hamir to Rana Kumbha. The entire tower is covered with architectural ornaments and inscribed images of gods and goddesses, seasons, weapons, musical instruments, etc. Its inscribed sculpture is a veritable text-book of Hindu iconography. The portraits of the architect of this tower Jaita and his 3 sons, Napa, Puja, and Poma are carved on the fifth floor of the tower. There are around 157 narrow steps leading to the terrace from where one can have a beautiful view of Chittorgarh town and the fort. The uppermost floor has been sealed off and is no longer accessible to visitors. 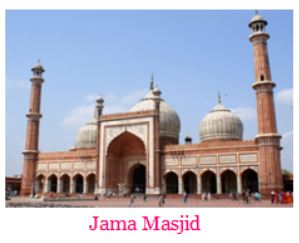 Jama Masjid
The Jama Masjid of Delhi, is the principal mosque of Old Delhi in India. Commissioned by the Mughal Emperor Shah Jahan, it is the best-known mosque in India. Construction began in 1650 and was completed in 1656. It lies at the beginning of the Chawri Bazar Road, a very busy central street of Old Delhi.
The later name, Jama Masjid, refers to the weekly Friday noon congregation prayers of Muslims, Jummah, which are usually done in a mosque, the "congregational mosque". The courtyard of the mosque can hold up to twenty-five thousand worshippers. The mosque also houses several relics in a closet in the north gate, including an antique copy of the Qur'an written on deer skin.

Black Pagoda Konark
Like most of the ancient words, origin of Konark is also Sanskrit and it has been derived from kona (meaning angle) and arka (meaning sun). In terms of scientific and architectural development, ancient India was much ahead of today’s time. First of all, it is the flawless proportions and impressive dimension of the Konark temple and then is the complete structure of the temple that proves this. The entire temple is in the form of the chariot of Surya that is drawn by seven horses. The main attraction of the temple is its twelve pairs of wheels located at the base of the temple. These wheels are not ordinary wheels but tell time as well – the spokes of the wheels create a sundial. One can calculate the precise time of the day by just looking at the shadow cast by these spokes. Isn’t it great? The wheels are also elegantly adorned.
The temple was so oriented on the shore that the first rays of the rising sun directly fall on the main entry. These sun rays would cross the Nata Mandir and get reflected from the diamond just at the centre of the idol. The diamond was positioned in the middle of this idol in the main sanctum. Moreover, the temple presents a way to teach mortality. The Konark Sun temple has two huge lions on either side of the entrance. Each lion is shown crushing an elephant. Beneath each elephant lies the human body. Lion represents pride and elephant represents money. By looking at them it becomes clear that how both these flaws can crush a human being.