Forests refers to natural vegetation where a plant community that has been left undisturbed over a long time which adjust to varied climate and soil conditions. 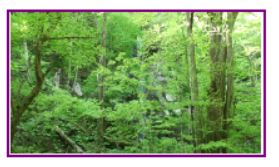 * Forests grow where temperature and rainfall are plentiful to support a tree cover. The type and thickness of natural vegetation varies from place to place due to the variation in these factors.
Types of Forests
Tropical Evergreen Forests/ Tropical Rain Forests
* These thick forests occur in the regions near the equator and close to the tropics.
* As these regions receive heavy rainfall throughout the year, the trees do not shed their leaves.
* The thick canopies of the closely spaced trees do not allow the sunlight to penetrate inside the forests.
e.g.: Western ghats, Hills of North − Eastern region and the Andaman and Nicobar Islands.

* They receive annual rainfall of 200 cms and mean annual temperature above 22° C.
* The trees reach great heights up to 60 meters & above.
e.g.: Rosewood, mahagony, ebony, rubber and cinchona.
* The common animals found in these forests are elephants, monkey, lemur, deer, one horned rhinoceros
* Besides these animals, plenty of birds, bats, sloth, scorpions and animals are also found.
Tropical Deciduous forests
* Tropical deciduous forests are also called as monsoon forests which are found in large parts of India, Northern Australia and in central America.
* These forests spread over the region receiving rainfall between 200 cm and 70 cm.
* Trees shed their leaves in the dry season to conserve water.
On the basis of availability of water, these forests are further divided into moist and dry deciduous.

(i) The Moist Deciduous Forests:
* These are found in the areas which record the rainfall between 100 − 200 cm.
* These forests are found in North − Eastern states along the foot hills of Himalayas, Eastern slopes of Western ghats and Odisha.
Teak, sal, shisham, amla, semul, kusum, mahua and sandalwood are the main species.
(ii) Dry Deciduous Forests
* These covers vast areas of the country where rainfall ranges between 70 - 100 cm.
* These are found in rainier parts of the peninsular plateau and the plains of Bihar and Uttar Pradesh.
Tendu, palas, amaltas, bel, khair, axlewood, peepal, Neem are the species found here.
* The vegetation cover is very scanty due to low temperature.
Temperate Evergreen Forests
* These are commonly found along the eastern margin of the continents such as South East USA, South China and in South East Brazil.
* They comprise both hard and soft wood trees like oak, pine, eucalyptus etc.
* Temperate deciduous forests are found in the same regions along with coastal regions of western europe. These shed their leaves in the dry season.
Coniferous Forests
* These are also called as Taiga and these are seen in higher altitudes (50° − 70°) .
* These are found in Himalayas in abundance.
* Chir, pine, cedar and softwood evergreen trees which are useful for making pulp in the manufacturing of paper, match boxes and packing boxes.
* Silver fox, mink, polar bear are common animals found here.
Mediterranean Forests
* These are mostly found in the areas around the mediterranean sea in Europe, Africa, Asia and in California, South West Africa.
* Citrus fruits such as oranges, figs, olives and grapes are commonly cultivated.
* There isn't much wild life here.
Montane Forests
* These are wet temperate type of forests found between a height of 1000 and 2000 metres.
* These forests cover mostly Southern slopes of Himalayas, places having high altitude in southern and north - east India.
* Alpine vegetation, silver fir, pines and birches are found. At higher altitudes, mosses and lichens form part of tundra vegetation.

Mangrove Forests
* Mangrove Forests are found on the areas of coasts influenced by tides.
* Mangroves have the roots of the plants submerged under water.
* The deltas of the Ganga, the Mahanadi, the Krishna, the Godavari and the Kaveri are covered by such vegetation.
* Palm, coconut, keora, agar also grow in some deltas.
* Royal Bengal Tiger is the famous animal in these forests.
Thorn Forests and Scrubs
* In the region with less then 70 cm of rainfall, thorny trees and bushes are found.
* This type of vegetation is found in Gujarat, Rajasthan, Madhya Pradesh, Chattisgarh, Uttart Pradesh and Haryana.
* Acacias, palms, euphorbias and cacti are main plant species.
* Rats, mice, rabbits, fox, wolt, tiger, lion.

Forest Cover in India
* According to the state records, the forest area covers 23.28% of the total land of the country.
Forest Area
* It is the area notified and recorded as the forest land irrespective of the existence of trees.
* It is based on the records of State Revenue department.
Forest cover
* It is the area occupied by forest with canopy and is based on aerial photographs and satellite imageries.
* Both forest area and forest cover vary from state to state.
* Lakshadweep has 0% forest area
* Andaman and Nicobar Islands have 86.93% forest area and forest cover is 84.01%.
Forest are useful to advantages in several ways but deforestation leads to many other disadvantages which can be replaced with afforestation. In order to curb this, Government of India have adopted a forest policy 1988 which emphasise sustainable forest management in order to conserve and expand forest reserve on the one hand and to meet the needs of local people on the other. The main aim of this policy is bringing 33% of geographical areas under forest cover.