Agriculture remains the most important sector of the Indian Economy whether it be the pre-independence or the post-independence periods.
Special Features of Agriculture:
i) From monetary point of view the share of agriculture sector in the economy remains at 14.1% of the GDP in the fiscal 1950 - 51 agriculture accounted for 55.4% in the GDP.
ii) The share of agriculture has been falling in the country's gross income while industrial and services sector's shares have been on a rise constantly.
* From the livelihood point of view still 58.2% people of India depend on the agriculture sector.
* In the developed economics such as the USA, France, Norway, the UK and Japan agriculture contributes only 2% of their GDP with only 2% people dependent on this sector for their livelihood.
iii) This is the biggest unorganised sector of the economy accounting for more than 90% share in the total unorganised labour force.
iv) It is the only profession which still carries no burden of individual Income tax.
v) India is among the 13 leading exporters of agricultural products in the world.
vi) According to the export figures, agriculture is deeply related to industrial growth and the national income in India.
* 1% increase in the agricultural growth leads to 0.5% increase in industrial output (growth) and 0.7% increase in the national income of India.
vii) Productivity gap between the field and ideal farm practices decreasing.
viii) Nearly 66% of the cropped area in the economy still depends on the uncertainties of monsoon for their irrigational requirements.
Agriculture Seasons in India
* Kharif
* Rabi
The agriculture crop year in India is from July to June.
* The Indian cropping season is classified into two main seasons
i) Kharif and
ii) Rabi based on the monsoon.
* The Kharif crops include rice, maize/ sorghum, pearl/millet/bajra, finger millet/ ragi (cereals), arhar (pulses), soyabean, groundnut (oil seeds), cotton etc.
* The Rabi crops include wheat, barley, oats (cerals), chikpea/gram (pulses), linseed, mustard (oilseeds) etc.
Kharif: The Kharif cropping season is from July to October during the south west / summer monsoon.
Rabi: The Rabi cropping season is from October to March (north-east/ returning/winter monsoon).
* The crops, grown between March and June are summer crops known as of Jayads.
* Pakistan and Bangladesh are two other countries that are using the term Kharif and Rabi to describe about their cropping patterns.
* The terms Kharif and Rabi originate from Arabic language where Kharif means Autumn and Rabi means Spring.

FOOD PHILOSOPHY OF INDIA
Indian food philosophy is generally seen divided into three phases with their own objectives and challenges.
The First Phase
This phase continued for the first three decades after Independence. The main aim and the struggle of this phase was producing as much food grains as required by the Indian population.
* Achieving physical access to food.
* The idea of the Green Revolution at the end of this phase atleast gave India the confidence of realising the objectives. At the end of 1980's, India was a self-sufficient country regarding food.
The Second Phase 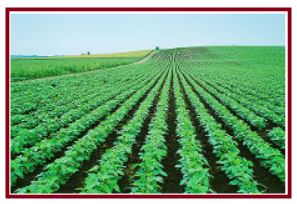 A new challenge confronted India - achieving Economic access to food.
* The situation went on worsening and by early 2000 there was a paradoxical situation in the country when it was having more than times buffer stocks of food grains in the central pool, but in several states people three were dying due to lack of food.
* As the inputs of the Green Revolution were costlier its output naturally were to be costlier. To fight the situation there should have been a time - bound and target - oriented macro - economic policy support.
* India is still in this phase and trying to solve the crisis through twin approach firstly, by creating maximum number of gainful employment and secondly by cutting cost of food grains.
* India is still fighting to achieve physical reach to the required level of food.
The Third phase
By the end of 1980's, world experts started questioning the very way world was carrying on with different modes of production.
* All developed economies had declared their agriculture to be an industry.
* The much - hyped Green Revolution was declared ecologically untenable and the world headed for organic farming, green farming, etc.
* India needed a new kind of Green Revolution which could deliver it the physical, economic as well as ecological access to food - the Second Green Revolution an all-in-one approach towards the agriculture sector. 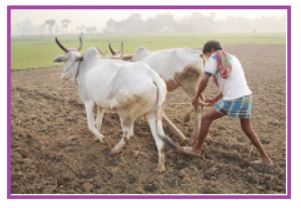 Land reforms in India had three objectives.
i) Removing institutional discrepancies of the agrarian structure inherited from the past which obstructed increasing agricultural production, such as
* The size of agricultural holding, land ownership, land inheritance, tenancy reforms, abolition of intermediaries introduction of modern institutional factors to agriculture, etc.
ii) The other objective of the land reforms in India was related to the issue of socio-economic inequality in the country.
iii) The Third objective of the land reforms in India was the objective of increasing agricultural production for solving the inter-related problems of poverty, malnutrition and food insecurity.
To realise the objectives of the land reforms, the government took three main steps which had many internal sub-steps.
1) Abolition of Intermediaries
Under this step, the age-old exploitative land tenure system of the Zamindari, Mahalwari and Ryotwari were fully abolished.
2) Tenancy Reforms
Three inter-related reforms protecting the land tenants were effected.
i) Regulation of rent so that a fixed and rational rate of rent could be paid by the share croppers to the land owners.
ii) Security of tenure so that a share-cropper could be feel secure about his future income and his economic security.
iii) Ownership rights to tenants so that the landless masses (i.e., the tenants, the share - croppers) could in transferred the final rights for the land they plough land to the tiller.
3) Reorganisation of Agriculture
i) Redistribution of land among the landless poor masses after promulgating timely ceiling laws.
* The move failed badly with few expections, such as West Bengal, Kerala and partially in Andhra Pradesh.
ii) Consolidation of land could only succeed in the regions of the Green Revolution (i.e., Haryana, Punjab and Western Uttar Pradesh).
iii) Co-operative farming which has a high socio economic moral base, was only used by the big farmers to save their form the draconian ceiling laws.
* Data regarding the numerical achievements of land reform have been highly discouraging.
* Tenancy reforms made tenants have their rights but only on 4% of the total operated areas of India.
* Redistribution of ownership rights of land took place but only on 2% of the total operated area of the country.
* Taken together, the whole process of land reforms could benefit only 6% of the operated area of the country.
* It was the failure of land reforms which made the government easily attracted towards the new policy of the Green Revolution. 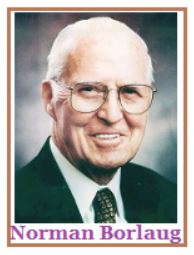 Components of the Green Revolution
1. The HYV Seeds
* They were popularly called the dwarf variety of seeds with the help of repeated mutations.
* Borlaug had been able to develop a seed which was raised in its nature of nutrients supplied to the different parts of the wheat plant.
* Against the leaves, stem and in favour of the grain.
* These seeds were non-photosynthetic, hence non-dependent on sun rays for targeted yields.
2. The Chemical Fertilizers
* The level of nutrients they required could not be supplied with the traditional composites because they have low concentration of nutrients content and required bigger area while sowing.
* A high concentration fertilizer was required which could be given to the targeted seed only.
* The only option was the chemical fertilizers.
* Urea (N), Phosphate (P) and Potash (K).
3. The Irrigation
For controlled growth of crops
* Adequate dilution of fertilizers, a controlled means of water supply was required.
* It made two important compulsions.
* Firstly the area of such crops should be at least free of flooding.
* Secondly artificial water supply should be developed.
4. Chemical Pesticides and Germicides
* As the new seeds were new and non - acclimatised to local pests, germs and diseases than the established indigenous varieties, use of pesticides and germicides became compulsory for result oriented and secured yields.
5. Chemical Herbicides and Weedicides
* To prevent costlier input of fertilisers not being consumed by the herbs and the weeds in the farmlands, herbicides and weedicides were used while sowing the HYV seeds.
6. Credit, Storage, Marketing/ Distribution
* For farmers to be capable of using the new and the costlier inputs of the green revolution, availability of easy and cheaper credit was a must.
* All these peripheral infrastructure were developed by the countries going for the Green Revolution with softer loans coming from the World Bank.
* India being the biggest beneficiary.