Three hundred years ago, astronomer Edmund Halley found a way to measure the distance to the Sun and to the planet Venus. Knowing these distances helped find the true scale of the entire solar system for the first time.
Halley knew that every 121 years the planet Venus passes in front of the Sun. Venus’ position, relative to the Sun behind it, appears very different when viewed from two different places on Earth. How different depends on how far away Venus and the Sun are from the Earth.
1761: Using observations of the "transit of Venus" made by astronomers around the world, the distance to the Sun is determined to be 93 million miles.
1836: German scientist Friedrich Bessel, using a specially designed telescope, is the first to see a star’s position appear to change as the Earth moves around the Sun. He finds the star to be 700,000 times further away than our Sun.

1908: Henrietta Leavitt discovers a way to tell the "wattage" of certain pulsating stars by observing how long it takes them to brighten and dim. The method opens the way to measuring distances all the way across the Milky Way galaxy.
1924: Edwin Hubble presents the first evidence that galaxies lie far beyond the Milky Way. To date, billions of galaxies have been discovered.
1986: Astronomers begin to use supernovae to find the distance to the furthest galaxies we can see.
2003: NASA’s WMAP satellite takes images of the most distant part of the universe observable from Earth.
Our universe extends staggeringly far beyond our own earthly environment. Trying to grasp the size in any meaningful way is bound to make your brain hurt. We can make analogies to at least understand a few of the relevant scales, but this can’t give us a complete picture all in one go. In the end, we must settle for an understanding of large numbers, aided by the tool of scientific notation. Modern astrophysicists don’t walk around with a deeply developed intuition for the vast scale of the universe—it’s too much for the human brain. But these scientists do walk around with a grasp of the relevant numbers involved. As an example, here are some of the numbers to understand the universe’s size:

* A lecture hall is approximately 10 meters across, and light travels across it in about 30 nanoseconds. We will be using light, which travels at 300,000,000 meters per second to quantify distances.
* The earth is 6378 km in radius, and light would travel seven times around the earth in one second if it could travel in a circle like this.
* The moon is about one-quarter the diameter of the earth, and is 1.25 light-seconds away—corresponding to about 30 earth diameters.
* The sun is 109 times the diameter of the earth, and about 8 light-minutes away (this is 1 "Astronomical Unit," or A.U., and is about 150 million km).
* Jupiter is about 40 light-minutes from the sun (5 A.U.).
* Pluto is about 40 A.U. from the Sun, or about 5.5 light-hours out.
* The next star is 4.5 light-years away—take a moment to appreciate this big jump.
* Large galaxies like our own are about 100,000 light-years across.
* The center of the Milky Way (our galaxy) is about 25,000 light-years away. A galaxy is a gravitationally bound collection of stars: islands of stars many of which make up the universe.
* The nearest large cluster of galaxies (Virgo Cluster) is about 50 million light-years away.
* The edge of the visible universe is about 13.7 billion light years away.

As bizarre as it may seem, space itself is expanding—specifically, the vast regions of space between galaxies. According to Einstein, space is not simply emptiness; it's a real, stretchable, flexible thing. The notion that space is expanding is a prediction of Einstein's theory of gravity, which describes a simple but universal relationship between space, time, and matter.

In the late 1920's, the astronomer Edwin Hubble first observed that distant galaxies are moving away from us, just as would be expected if the space between galaxies were growing in volume and just as predicted by Einstein's theory of gravity. Since then, astronomers have measured this recession for millions of galaxies. 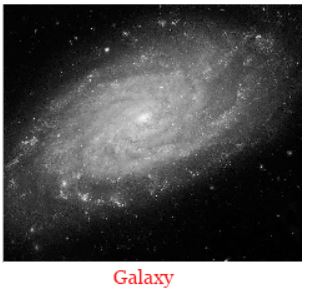 The galaxies sit more or less passively in the space around them. As the space between galaxies expands, it carries the galaxies further apart—like raisins in an expanding dough. However, the universe is a chaotic place and the gravity from one galaxy, or from a group of galaxies, may disturb the motion of its near neighbours, causing them to collide. But on average, when you compare two large enough chunks of space, the galaxies in one are moving away from the galaxies in the other. Amazingly, space is not actually expanding "into" anything. Put another way, a given region of space doesn't actually "push" the rest of the universe out of the way as it expands.