The most massive planet in our solar system - with dozens of moons and an enormous magnetic field - Jupiter forms a kind of miniature solar system. It resembles a star in composition, but did not grow big enough to ignite. The planet's swirling cloud stripes are punctuated by massive storms such as the Great Red Spot, which has raged for hundreds of years.
Need-to-know things about Jupiter:
1. If the sun were as tall as a typical front door, the Earth would be the size of a nickel and Jupiter would be about as big as a basketball.
2. Jupiter orbits our sun, a star. Jupiter is the fifth planet from the sun at a distance of about 778 million km or 5.2 AU. 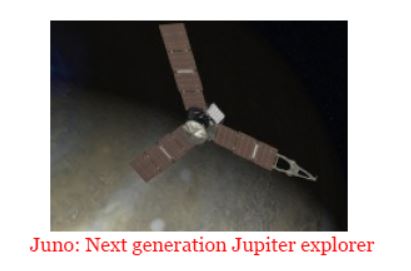 3. One day on Jupiter takes about 10 hours (the time it takes for Jupiter to rotate or spin once). Jupiter makes a complete orbit around the sun (a year in Jovian time) in about 12 Earth years (4,333 Earth days).
4. Jupiter is a gas-giant planet and therefore does not have a solid surface. However, it is predicted that Jupiter has an inner, solid core about the size of the Earth.
5.  Jupiter's atmosphere is made up mostly of hydrogen (H2) and helium (He).
6. Jupiter has 50 known moons, with an additional 17 moons awaiting confirmation of their discovery - that is a total of 67 moons.
7. Jupiter has a faint ring system that was discovered in 1979 by the Voyager 1 mission.
8. Many missions have visited Jupiter and its system of moons. The Juno mission will arrive at Jupiter in 2016.
9. Jupiter cannot support life as we know it. However, some of Jupiter's moons have oceans underneath their crusts that might support life.
10. Jupiter's Great Red Spot is a gigantic storm (bigger than Earth) that has been raging for hundreds of years.
Jupiter is the largest and most massive planet in our solar system, containing more than twice the amount of material of the other bodies orbiting our sun combined. Most of the material left over after the formation of the sun went to Jupiter, forming a type of planet called a gas giant.

Jupiter's appearance is a tapestry of colorful cloud bands and spots. Most visible clouds are composed of ammonia and ammonia compounds, with unknown chemicals providing color. Jupiter's fast rotation - spinning once every 10 hours - creates strong jet streams, smearing its clouds into bands across the planet.
With no solid surface to slow them down, Jupiter's spots can persist for many years. The Great Red Spot, a swirling oval of clouds twice as wide as Earth, has been observed on the giant planet for more than 300 years. More recently, three smaller ovals merged to form the Little Red Spot, about half the size of its larger cousin. Scientists do not yet know if these ovals and planet-circling bands are shallow or deeply rooted to the interior.
The composition of Jupiter's atmosphere is similar to that of the sun - mostly hydrogen and helium. Deep in the atmosphere, pressure and temperature increase, compressing the hydrogen gas into a liquid. This gives Jupiter the largest ocean in the solar system - an ocean made of hydrogen instead of water. Scientists think that, at depths perhaps halfway to the planet's center, the pressure becomes so great that electrons are squeezed off the hydrogen atoms, making the liquid electrically conducting. Jupiter's fast rotation is thought to drive electrical currents in this region, generating the planet's powerful magnetic field. It is still unclear if, deeper down, Jupiter has a central core of solid material.