Sun-scorched Mercury is only slightly larger than Earth's moon. Like the moon, Mercury has very little atmosphere to stop impacts and it is covered with craters. Mercury's dayside is super-heated by the sun, but at night temperatures drop hundreds of degrees below freezing. Ice may even exist in craters. Mercury's egg-shaped orbit takes it around the sun every 88 days.
Need-to-know things about Mercury:
1. Mercury is the smallest planet in our solar system - only slightly larger than the Earth's moon.
2. It is the closest planet to the sun at a distance of about 58 million km or 0.39 AU.
3. One day on Mercury (the time it takes for Mercury to rotate or spin once) takes 59 Earth days. Mercury makes a complete orbit around the sun (a year in Mercury time) in just 88 Earth days.
4. Mercury is a rocky planet, also known as a terrestrial planet. Mercury has a solid, cratered surface, much like Earth's moon.
5. Mercury's thin atmosphere, or exosphere, is composed mostly of oxygen (O2), sodium (Na), hydrogen (H2), helium (He), and potassium (K). Atoms that are blasted off the surface by the solar wind and micrometeoroid impacts create Mercury's exosphere. 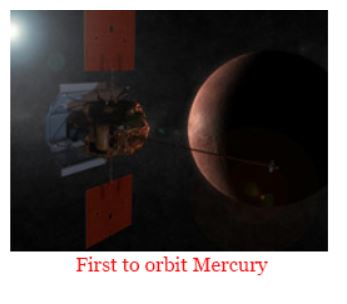 Mercury speeds around the sun every 88 days, traveling through space at nearly 50 km (31 miles) per second faster than any other planet. One Mercury solar day equals 175.97 Earth days.
Instead of an atmosphere, Mercury possesses a thin exosphere made up of atoms blasted off the surface by the solar wind and striking micrometeoroids. Because of solar radiation pressure, the atoms quickly escape into space and form a tail of neutral particles. Though Mercury's magnetic field at the surface has just one percent the strength of Earth's, it interacts with the magnetic field of the solar wind to episodically create intense magnetic tornadoes that funnel the fast, hot solar wind plasma down to the surface. When the ions strike the surface, they knock off neutrally charged atoms and send them on a loop high into the sky.