Little chunks of rock and debris in space are called meteoroids. They become meteors - or shooting stars - when they fall through a planet's atmosphere; leaving a bright trail as they are heated to incandescence by the friction of the atmosphere. Pieces that survive the journey and hit the ground are called meteorites.
Need-to-know things about Meteors and Meteorites:
1.Meteoroids become meteors - or shooting stars - when they interact with a planet's atmosphere and cause a streak of light in the sky. Debris that makes it to the surface of a planet from meteoroids are called meteorites. 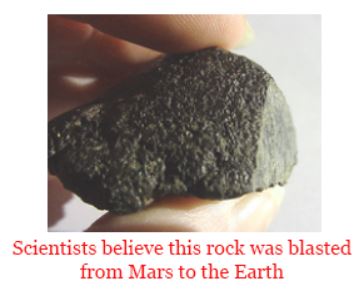 2. Meteorites may vary in size from tiny grains to large boulders. One of the largest meteorite found on Earth is the Hoba meteorite from southwest Africa, which weighs roughly 54,000 kg (119,000 pounds).
3.Meteor showers are usually named after a star or constellation which is close to the radiant (the position from which the meteor appears to come).
4. Meteors and meteorities begin as meteoroids, which are little chunks of rock and debris in space.
5. Most meteorites are either iron, stony or stony-iron.
6.Meteorites may look very much like Earth rocks, or they may have a burned appearance. Some may have depressioned (thumbprint-like), roughened or smooth exteriors.
7. Many of the meteor showers are associated with comets. The Leonids are associated with comet Tempel-Tuttle; Aquarids and Orionids with comet Halley, and the Taurids with comet Encke.
8. When comets come around the sun, they leave a dusty trail. Every year the Earth passes through the comet trails, which allows the debris to enter our atmosphere where it burns up and creates fiery and colorful streaks (meteors) in the sky.
9. Leonid MAC (an airborne mission that took flight during the years 1998 - 2002) studied the interaction of meteoroids with the Earth's atmosphere.
10. Meteoroids, meteors and meteorites cannot support life. However, they may have provided the Earth with a source of amino acids: the building blocks of life.