Dark, cold and whipped by supersonic winds, Neptune is the last of the hydrogen and helium gas giants in our solar system. More than 30 times as far from the sun as Earth, the planet takes almost 165 Earth years to orbit our sun. In 2011 Neptune completed its first orbit since its discovery in 1846.
Need-to-know things about Neptune:
1. If the sun were as tall as a typical front door, the Earth would be the size of a nickel and Neptune would be about as big as a baseball.
2. Neptune orbits our sun, a star. Neptune is the eighth planet from the sun at a distance of about 4.5 billion km or 30.07 AU. 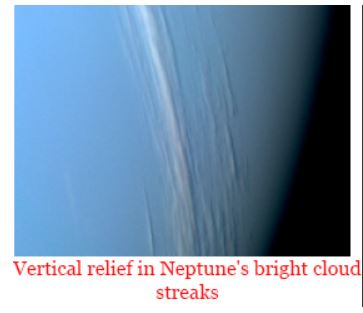 3. One day on Neptune takes about 16 hours (the time it takes for Neptune to rotate or spin once). Neptune makes a complete orbit around the sun (a year in Neptunian time) in about 165 Earth years (60,190 Earth days).
4. Neptune is a sister ice giant to Uranus. Neptune is mostly made of a very thick, very hot combination of water (H2O), ammonia (NH3), and methane (CH4) over a possible heavier, approximately Earth-sized, solid core.
5. Neptune's atmosphere is made up mostly of hydrogen (H2), helium (He) and methane (CH4).
6. Neptune has 13 confirmed moons (and 1 more awaiting official confirmation of discovery). Neptune's moons are named after various sea gods and nymphs in Greek mythology.
7. Neptune has six rings
8. Voyager 2 is the only spacecraft to have visited Neptune.
9. Neptune cannot support life as we know it.
10. At times during the course of Neptune's orbit, dwarf planet Pluto is actually closer to the sun, and us, than Neptune. This is due to the unusual elliptical (egg) shape of Pluto's orbit.

The ice giant Neptune was the first planet located through mathematical predictions rather than through regular observations of the sky. Galileo had recorded it as a fixed star during observations with his small telescope in 1612 and 1613. When Uranus didn't travel exactly as astronomers expected it to, a French mathematician, Urbain Joseph Le Verrier, proposed the position and mass of another as yet unknown planet that could cause the observed changes to Uranus' orbit. After being ignored by French astronomers, Le Verrier sent his predictions to Johann Gottfried Galle at the Berlin Observatory, who found Neptune on his first night of searching in 1846. Seventeen days later, its largest moon, Triton, was also discovered.
Nearly 4.5 billion kilometers from the Sun, Neptune orbits the Sun once every 165 years. It is invisible to the naked eye because of its extreme distance from Earth. Interestingly, the highly eccentric orbit of the dwarf planet Pluto brings Pluto inside Neptune's orbit for a 20-year period out of every 248 Earth years. Pluto can never crash into Neptune, though, because for every three laps Neptune takes around the Sun, Pluto makes two. This repeating pattern prevents close approaches of the two bodies.
The main axis of Neptune's magnetic field is tipped over by about 47 degrees compared with the planet's rotation axis. Like Uranus, whose magnetic axis is tilted about 60 degrees from the axis of rotation, Neptune's magnetosphere undergoes wild variations during each rotation because of this misalignment. The magnetic field of Neptune is about 27 times more powerful than that of Earth.
Neptune's atmosphere extends to great depths, gradually merging into water and other melted ices over a heavier, approximately Earth-size solid core. Neptune's blue color is the result of methane in the atmosphere. Uranus' blue-green color is also the result of atmospheric methane, but Neptune is a more vivid, brighter blue, so there must be an unknown component that causes the more intense color.