Ocean currents play a very crucial role as regulators of the thermal environment at the earth's surface. When we consider the entire globe, the vast current systems are much helpful in the exchange of heat between the low and high latitudes.
Thus, they are so essential in sustaining the terrestrial energy budget. However, even on a local scale warm ocean currents bring a moderating influence to coasts in polar regions. On the other hand, cool currents greatly reduce the heat of tropical deserts along narrow coastal belts.
Where a warm ocean current flows near a coast, temperatures tend to be moderated. It is the result of the moderation of temperature affected by the Gulf stream and the North Atlantic Drift that the British Isles and the north western Europe have the mild climate.
On the contrary, where winds coming from over the warm water blow over the cooler land, there are heavy cloud cover and frequent precipitation. Where there is a cool current offshore, it tends to induce cooler temperatures over the adjacent land than might otherwise be expected. In such a case, the amount of precipitation is reduced. 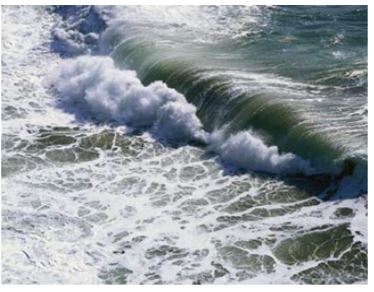 This is because a stable lapse rate or even a temperature inversion produced in the lower troposphere results from such a cool offshore current. Besides, if there is a cool current in combination with the descending air of high-pressure system, the result is an extremely dry coastal climate as is found in Chile, Peru and southwest Africa.
When moisture-laden winds blowing towards land come into contact with the cool waters of the ocean currents and the lower temperatures that they have, they lose much of their moisture through the process of condensation. This condensed moisture usually takes the form of fog. However, when such an air passes over the warm land, its moisture holding capacity is increased. Thus, there is little chance of precipitation.

Causes of Ocean Currents
There are several causes for ocean currents, including:
Solar Activity: This is the single most important cause. The Sun provides the bulk of the energy which drives the circulation of water in the oceans, either directly or indirectly (through winds). The uneven distribution of solar energy across the globe (highest at the equator, decreasing towards the poles) produces an uneven heating of water in the ocean. Like air, hot water expands. The differential heating is so pronounced that sea level at the equator is about 8 cm (3.15 inches) higher than at temperate latitudes.

Gravity: The equatorial bulge of the oceans caused by the expansion of water under equatorial heat creates a slope and water tends to run downhill under the force of gravity. This is one of the major reasons for surface water flow from the equator towards higher latitudes. Compare this to the flow of air (winds) at the surface, also from the equator to the tropics.
Winds: Winds produce a flow of water at the ocean surface due to frictional coupling between the wind and the surface of the oceans. Since the oceans are largely flat expanses unobstructed by topography, winds can blow for long "fetches" or distances, for prolonged periods of time.
Friction between the air and the surface of the water is sufficiently high that a wind blowing for about 10 hours can produce a surface current in the water at about 2% of the wind velocity. So a steady wind blowing in a certain direction at 20 miles per hour for about 10 hours will produce a surface water current at about 0.4 miles per hour. The direction of the water current is not the same as that of the wind flow. The direction of the water current is affected by a phenomenon known as Ekman Transport.