Ocean currents are the vertical or horizontal movement of both surface and deep water throughout the world’s oceans. Currents normally move in a specific direction and aid significantly in the circulation of the Earth’s moisture, the resultant weather, and water pollution. 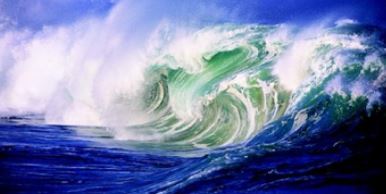 Oceanic currents are found all over the globe and vary in size, importance, and strength. Some of the more prominent currents include the California and Humboldt Currents in the Pacific, the Gulf Stream and Labrador Current in the Atlantic, and the Indian Monsoon Current in the Indian Ocean. These are just a sampling of the seventeen major surface currents found in the world’s oceans.

The Types and Causes of Ocean Currents:
In addition to their varying size and strength, ocean currents differ in type. They can be either surface or deep water.
Surface currents are those found in the upper 400 meters of the ocean and make up about 10% of all the water in the ocean. Surface currents are mostly caused by the wind because it creates friction as it moves over the water. This friction then forces the water to move in a spiral pattern, creating gyres. In the northern hemisphere, gyres move clockwise and in the southern they spin counter clockwise. The speed of surface currents is greatest closer to the ocean’s surface and decreases at about 100 meters below the surface.
Because surface currents travel over long distances, the Coriolis force also plays a role in their movement and deflects them, further aiding in the creation of their circular pattern. Finally, gravity plays a role in the movement of surface currents because the top of the ocean is uneven. Mounds in the water form in areas where the water meets land, where water is warmer, or where two currents converge. Gravity then pushes this water down slope on the mounds and creates currents. Deep water currents, also called Thermohaline circulation, are found below 400 meters and make up about 90% of the ocean.

Like surface currents, gravity plays a role in the creation of deep water currents but these are mainly caused by density differences in the water.
Density differences are a function of temperature and salinity. Warm water holds less salt than cold water so it is less dense and rises toward the surface while cold, salt laden water sinks. As the warm water rises though, the cold water is forced to rise through upwelling and fill the void left by the warm. By contrast, when cold water rises, it too leaves a void and the rising warm water is then forced, through down welling, to descend and fill this empty space, creating thermohaline circulation.
Thermohaline circulation is known as the Global Conveyor Belt because its circulation of warm and cold water acts as a submarine river and moves water throughout the ocean.
Finally, seafloor topography and the shape of the ocean’s basins impact both surface and deep water currents as they restrict areas where water can move and "funnel" it into another.

The Importance of Ocean Currents
Because ocean currents circulate water worldwide, they have a significant impact on the movement of energy and moisture between the oceans and the atmosphere.

As a result, they are important to the world’s weather. The Gulf Stream for example is a warm current that originates in the Gulf of Mexico and moves north toward Europe. Since it is full of warm water, the sea surface temperatures are warm, which keeps places like Europe warmer than other areas at similar latitudes.
The Humboldt Current is another example of a current that affects weather. When this cold current is normally present off the coast of Chile and Peru, it creates extremely productive waters and keeps the coast cool and northern Chile arid. However, when it becomes disrupted, Chile’s climate is altered and it is believed that El Nino plays a role in its disturbance.
Like the movement of energy and moisture, debris can also get trapped and moved around the world via currents. This can be man-made which is significant to the formation of trash islands or natural such as icebergs. The Labrador Current, which flows south out of the Arctic Ocean along the coasts of Newfoundland and Nova Scotia, is famous for moving icebergs into shipping lanes in the North Atlantic.
Currents plan an important role in navigation as well. In addition to being able to avoid trash and icebergs, knowledge of currents is essential to the reduction of shipping costs and fuel consumption.

Today, shipping companies and even sailing races often use currents to reduce time spent at sea.
Finally, ocean currents are important to the distribution of the world’s sea life. Many species rely on currents to move them from one location to another whether it is for breeding or just simple movement over large areas.

Ocean Currents as Alternative Energy:
Today, ocean currents are also gaining significance as a possible form of alternative energy. Because water is dense, it carries an enormous amount of energy that could possibly be captured and converted into a usable form through the use of water turbines. Currently this is an experimental technology being tested by the United States, Japan, China, and some European Union countries.
Whether ocean currents are used as alternative energy, to reduce shipping costs, or in their natural to state to move species and weather worldwide, they are significant to geographers, meteorologists, and other scientists because they have a tremendous impact on the globe and earth-atmosphere relations.

Types of ocean currents: Ocean currents are water movement and circulation patterns that influence climate zones and weather patterns around the world.

The directions these currents take can be impacted by weather, movements of celestial bodies and even by the actions of man. There are two basic types of ocean currents, and each is influenced by a variety of different factors. Together, these currents make up the ocean patterns and flow that control water bodies across the planet.
Hot Currents: The hot currents flowing from tropical zones of lower latitudes to higher temperature and sub polar zones are known as hot water currents
Cold Currents: The currents flowing from higher latitudes to lower latitudes are known as cold currents. The only exception to the conduction of ocean currents is found in the Indian Ocean. The flow of currents changes here with a change in the direction of the monsoon winds. The hot currents flow towards cooler oceans and the cold currents flow towards the warmer oceans
Surface Currents: Surface currents are water movements that take place on the top layer of the ocean and make up about 10 percent of the ocean's water. In most areas, surface currents make up the top 400 meters of the ocean, though this can vary due to tides, wind and weather conditions. They are caused primarily by wind and tend to develop rotational patterns. The location of these surface currents is heavily influenced by seasonal patterns.

Deep Water Currents: Deep water currents are water movement patterns that take place more than 400 meters below sea level. They are influenced by both ocean density and temperature changes. Cooler water has a higher salt density than warm water, so as currents flow through cool areas, the warmer water in that region rises and the cool water flowing into the area sinks. This pattern continues as water currents travel through broad temperature zones and climate regions. The rising and sinking water actions cause the movement we call currents.
Measuring Currents: Both types of ocean currents are measured using units called Sverdrup (Sv). Sverdrup measures current flow rates, where 1 Sv is equal to 10 to the 6th power cubic meters per second, or about 265 million gallons per second. While ocean currents themselves can have flow rates of hundreds or thousands of Sv per second, the total Sv flow for all the fresh water sources in the world is only equal to about 1 Sv. This helps demonstrate the massive power and speed that ocean currents are capable of.
Influences: A vast number of influences combine to determine the patterns of surface and deep water currents. As the Earth rotates around the sun and the moon, the gravitational pull of each celestial body causes ocean levels to be slightly deeper at certain times. This creates high and low tides twice a day, which occur at different times in different parts of the world.
When the gravitational pull of the sun and moon are lined up in a certain way, they can create particularly strong tides that can dramatically affect water levels. The action created by tides can impact both types of currents by modifying depth levels and water displacement.
Impacts: Ocean currents can have a tremendous impact on citizens and environments across the globe. Early on, the study of currents was important due to shipping concerns. A knowledge of ocean currents allowed sailors to safely reach their destination, or to get there more quickly. Today, an understanding of ocean currents can dramatically reduce shipping times and fuel costs. These currents are also important to sailing competitors, who study surface circulation to improve race results.