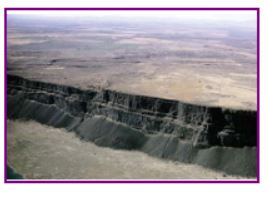 A Plateau is an elevated flat land. A plateau may have one or more sides with steep slopes. The height of plateau varies from few hundred metres to several thousand metres. These plateaus may be young or old.
* The Tibet plateau is the highest plateau in the world with a height of 4,000 to 6,000 metres above the mean sea level.
* The Deccan plateau in India and Western plateau of Australia are the examples of oldest plateaus.
There are 2 kinds of plateaus
(1) Dissected plateaus
(2) Volcanic plateaus
(1) Dissected plateaus: These plateau are formed as a result of upward movement in the Earth's crust and it is due to the slow collision of tectonic plates.
e.g.: The colorada plateau in the Western U.S. has been rising about 0.03 cms a year.

(2) Volcanic Plateaus: These are formed by numerous small volcanic eruptions that slowly build up as a plateau from the resulting lava flows.
e.g.:  The North Island volcanic plateau.

The other kinds are
Inter − Mountainous Plateaus: These plateaus formed between the mountains.
e.g.:  Tibetan plateau, which is regarded as the roof of the world is surrounded by the highest peaks in the Himalayas, Karakoram and Pamir mountain Ranges.

Continental Plateaus: These are very extensive plateaus which are surrounded by Oceanic coasts or plains.
e.g.:  Southern plateau

Dome shaped Plateaus: These plateaus are formed when the middle portion of the land is raised and the sides are rounded.
e.g.:  Chotanagpur plateau of Jharkhand.