a. Budding
In budding, an offspring grows directly out of the body of the parent. Hydras, predatory cnidarians, reproduce by budding. 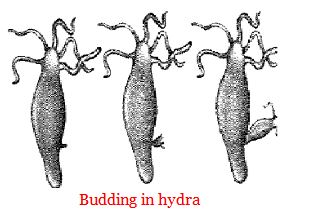 Internal budding or Endodyogeny is a process of asexual reproduction, favoured by parasites such as Toxoplasma gondii. It involves an unusual process in which two daughter cells are produced inside a mother cell, which is then consumed by the offspring prior to their separation. Endopolygeny is the division into several organisms at once by internal budding. Budding also is present in some worm like Taenia or Echinococci, this worm produce cyst and then produce protoscolex with budding.

b. Fission
An important form of fission is binary fission. In binary fission, the parent organism is replaced by two daughter organisms, because it literally divides in two. Organisms, both prokaryotes (the archaea and the bacteria), and eukaryotes (such as protists and  nicellular fungi), reproduce asexually through binary fission. 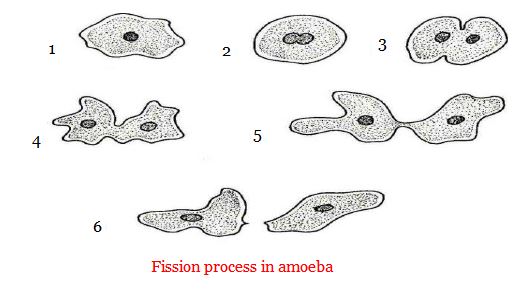 c. Fragmentation
In fragmentation, a parent breaks into multiple pieces, each of which develops into a fully functioning, independent individual. Fragmentation is seen in many organisms such as animals (worms, turbellarians and sea stars), fungi, and plants. 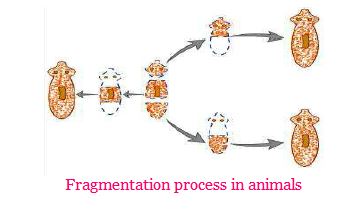 Fragmentation, also known as splitting, as a method of reproduction is seen in many organisms such as filamentous cyanobacteria, molds, lichens, many plants, and animals like sponges, acoel flatworms, some annelid worms, and sea stars. When the splitting occurs due to specific developmental changes, the terms architomy, paratomy and budding are used.

In architomy the animal splits at a particular point and the two fragments regenerate the missing organs and tissues.
In paratomy, the split occurs perpendicular to the antero-posterior axis and the split is preceded by the "pregeneration" of the anterior structures in the posterior portion. The two organisms have their body axis aligned i.e. they develop in a head to tail fashion.
Budding can be considered to be similar to paratomy except that the body axes need not be aligned. The new head may grow toward the side or even point backward.

d. Parthenogenesis
Parthenogenesis is a form of asexual reproduction in which growth and development of embryos occur without fertilization. In animals, parthenogenesis means development of an embryo from an unfertilized egg cell and is a component process of apomixes.
Parthenogenesis occurs naturally in many plants, some invertebrate animal species and a few vertebrates. This type of reproduction has been induced artificially in a few species including fish and amphibians. Normal egg cells form after meiosis and are haploid, with half as many chromosomes as their mother's body cells. Haploid individuals, however, are usually nonviable, and parthenogenetic offspring usually have the diploid chromosome number.

Depending on the mechanism involved in restoring the diploid number of chromosomes, parthenogenetic offspring may have anywhere between all and half of the mother's alleles. he offspring having all of the mother's genetic material are called full clones and those having only half are called half clones.