Adorned with thousands of beautiful ringlets, Saturn is unique among the planets. All four gas giant planets have rings - made of chunks of ice and rock - but none are as spectacular or as complicated as Saturn's. Like the other gas giants, Saturn is mostly a massive ball of hydrogen and helium.
Need-to-know things about Saturn:
1. If the sun were as tall as a typical front door, the Earth would be the size of a nickel and Saturn would be about as big as a basketball.
2. Saturn orbits our sun, a star. Saturn is the sixth planet from the sun at a distance of about 1.4 billion km or 9.5 AU. 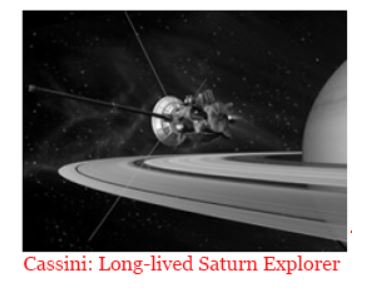 3. One day on Saturn takes 10.7 hours (the time it takes for Saturn to rotate or spin once). Saturn makes a complete orbit around the sun (a year in Saturnian time) in 29 Earth years.
4. Saturn is a gas-giant planet and does not have a solid surface.
5. Saturn's atmosphere is made up mostly of hydrogen (H2) and helium (He).
6. Saturn has 53 known moons with an additional 9 moons awaiting confirmation of their discovery.
7. Saturn has the most spectacular ring system of all our solar system's planets. It is made up of seven rings with several gaps and divisions between them.
8. Five missions have been sent to Saturn. Since 2004, Cassini has been exploring Saturn, its moons and rings.
9. Saturn cannot support life as we know it. However, some of Saturn's moons have conditions that might support life.
10. When Galileo Galilei looked at Saturn through a telescope in the 1600s, he noticed strange objects on each side of the planet and drew in his notes a triple-bodied planet system and then later a planet with arms or handles. The handles turned out to be the rings of Saturn.

Saturn was the most distant of the five planets known to the ancients. In 1610, Italian astronomer Galileo Galilei was the first to gaze at Saturn through a telescope. To his surprise, he saw a pair of objects on either side of the planet. He sketched them as separate spheres, thinking that Saturn was triple-bodied. Continuing his observations over the next few years, Galileo drew the lateral bodies as arms or handles attached to Saturn. In 1659, Dutch astronomer Christiaan Huygens, using a more powerful telescope than Galileo's, proposed that Saturn was surrounded by a thin, flat ring. In 1675, Italian-born astronomer Jean-Dominique Cassini discovered a "division" between what are now called the A and B rings. It is now known that the gravitational influence of Saturn's moon Mimas is responsible for the Cassini Division, which is 4,800 kilometers wide.
Like Jupiter, Saturn is made mostly of hydrogen and helium. Its volume is 755 times greater than that of Earth. Winds in the upper atmosphere reach 500 meters per second in the equatorial region. In contrast, the strongest hurricane-force winds on Earth top out at about 110 meters per second. These super-fast winds, combined with heat rising from within the planet's interior, cause the yellow and gold bands visible in the atmosphere.