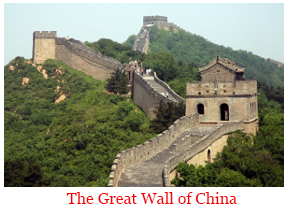 Great Wall of China:
* Perhaps the most recognizable symbol of China and its long and vivid history, the Great Wall of China actually consists of numerous walls and fortifications, many running parallel to each other.
* Originally conceived by Emperor Qin Shi Huang (c. 259-210 B.C.) in the third century B.C. as a means of preventing incursions from barbarian nomads into the Chinese Empire, the wall is one of the most extensive construction projects ever completed.
* The best-known and best-preserved section of the Great Wall was built in the 14th through 17th centuries A.D., during the Ming dynasty (1368-1644).
* Though the Great Wall never effectively prevented invaders from entering China, it came to function more as a psychological barrier between Chinese civilization and the world, and remains a powerful symbol of the country’s enduring strength. 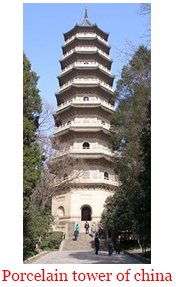 Porcelain Tower of China:
* The Porcelain Tower also known as Bao'ensi, is a historical site located on the south bank of external Qinhuai River in Nanjing, China.
* It was a pagoda constructed in the 15th century during the Ming Dynasty, but was mostly destroyed in the 19th century during the course of the Taiping Rebellion.
* In 2010 Wang Jianlin, a Chinese businessman, donated one billion yuan (US $156 million) to the city of Nanjing for its reconstruction of the pagoda. This is reported to be the largest single personal donation ever made in China. 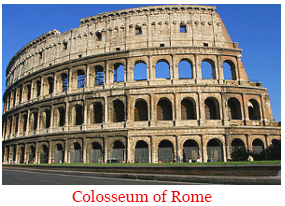 * The Colosseum is situated just east of the Roman Forum. Construction began under the emperor Vespasian in 70 AD, and was completed in 80 AD under his successor and heir Titus.
* Further modifications were made during the reign of Domitian. These three emperors are known as the Flavian dynasty, and the amphitheatre was named in Latin for its association with their family name (Flavius).
* Location        -    Regio IV Templum Pacis ("Temple of Peace")
* Built in           -    70–80 AD
* Built by/for   - Vespasian, Titus

* Stonehenge is a prehistoric monument located in Wiltshire, England, about 2 miles west of Amesbury and 8 miles north of Salisbury.
* One of the most famous sites in the world, Stonehenge is the remains of a ring of standing stones set within earthworks. It is in the middle of the most dense complex of Neolithic and Bronze Age monuments in England, including several hundred burial mounds.
* Archaeologists believe it was built anywhere from 3000 BC to 2000 BC. Radiocarbon dating in 2008 suggested that the first stones were raised between 2400 and 2200 BC, whilst another theory suggests that bluestones may have been raised at the site as early as 3000 BC.
* The surrounding circular earth bank and ditch, which constitute the earliest phase of the monument, have been dated to about 3100 BC.
* The site and its surroundings were added to the UNESCO's list of World Heritage Sites in 1986 in a co-listing with Avebury Henge. It is a national legally protected Scheduled Ancient Monument.
* Stonehenge is owned by the Crown and managed by English Heritage, while the surrounding land is owned by the National Trust.
* Archaeological evidence found by the Stonehenge Riverside Project in 2008 indicates that Stonehenge could have been a burial ground from its earliest beginnings.
* The dating of cremated remains found on the site indicate that deposits contain human bone from as early as 3000 BC, when the ditch and bank were first dug.
* Such deposits continued at Stonehenge for at least another 500 years. The site is a place of religious significance and pilgrimage in Neo-Druidry.

* The Leaning Tower of Pisa or simply the Tower of Pisa is the campanile, or freestanding bell tower, of the cathedral of the Italian city of Pisa, known worldwide for its unintended tilt to one side.
* It is situated behind the Cathedral and is the third oldest structure in Pisa's Cathedral Square after the Cathedral and the Baptistry. The tower's tilt began during construction, caused by an inadequate foundation on ground too soft on one side to properly support the structure's weight.
* The tilt increased in the decades before the structure was completed, and gradually increased until the structure was stabilized by efforts in the late 20th and early 21st centuries.
* The height of the tower is 55.86 metres from the ground on the low side and 56.67 metres on the high side. The width of the walls at the base is 2.44 m.
* Its weight is estimated at 14,500 metric tons. The tower has 296 or 294 steps; the seventh floor has two fewer steps on the north-facing staircase.
Prior to restoration work performed between 1990 and 2001, the tower leaned at an angle of 5.5 degrees, but the tower now leans at about 3.99 degrees.
» This means that the top of the tower is displaced horizontally 3.9 metres from where it would be if the structure were perfectly vertical. 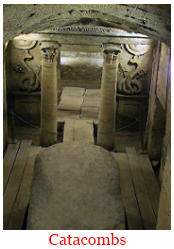 Catacombs of Alexandria:
» The Catacombs (meaning underground tunnels) lie in the district of Karmouz to the east of Alexandria. The area was called Kom El-Shouqafa or a pile of shards.
* The cemetery dates back to the 1st century A.D and was used until the 4th century A.D. It was discovered in 1900 when by pure chance, a donkey drawn cart fell into a pit, which led to the discovery.
* The Catacombs in Alexandria are so called because the design was very similar to the Christian Catacombs in Rome. Most likely it was a private tomb, later converted to a public cemetery.
* It consists of 3 levels cut into the rock, a staircase, a rotunda, the triclinium or banquette hall, a vestibule, an antechamber and the burial chamber with three recesses in it; in each recess there is a sarcophagus. The Catacombs also contain a large number of Luculi or grooves cut in the rock. 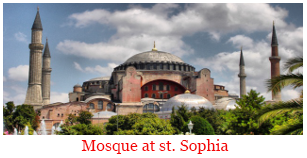 * Hagia Sophia is a former Greek Orthodox patriarchal basilica (church), later an imperial mosque, and now a museum in Istanbul, Turkey. From the date of its construction in 537 until 1453, it served as an Eastern Orthodox cathedral and seat of the Patriarchate of Constantinople, except between 1204 and 1261, when it was converted to a Roman Catholic cathedral under the Latin Empire.
* The building was a mosque from 29 May 1453 until 1931. It was then secularized and opened as a museum on 1 February 1935.
* The Church was dedicated to the Wisdom of God, the Logos, the second person of the Holy Trinity, its patronal feast taking place on 25 December, the commemoration of the Birth of the incarnation of the Logos in Christ.
* Although sometimes referred to as Sancta Sophia, sophia being the phonetic spelling in Latin of the Greek word for wisdom. Famous in particular for its massive dome, it is considered the epitome of Byzantine architecture and is said to have "changed the history of architecture."
* It remained the world's largest cathedral for nearly a thousand years, until Seville Cathedral was completed in 1520. The current building was originally constructed as a church between 532 and 537 on the orders of the Byzantine Emperor Justinian and was the third Church of the Holy Wisdom to occupy the site, the previous two having both been destroyed by rioters. It was designed by the Greek scientists Isidore of Miletus, a physicist, and Anthemius of Tralles, a mathematician.