The thin layer of grainy substance covering the surface of the earth is called soil. It is a dynamic

medium in which many chemical, physical and biological activities go constantly.
* Soil is made up of organic matter, minerals and weathered rocks found on the earth.
* Soil is a medium for growth and its characteristics keeps on fluctuating according to the seasons.

Factors of Soil formation
Parent Rock: It determines colour, texture, chemical properties, mineral, content and permeability.
Topography: The influence of topography is felt through the amount of sunlight, slopes, altitude determine the accumulation of soil.
Climate: Temperature, Rainfall, rate of weathering and humus have their influence upon soil formation.
Biological Activity: Flora, Fauna and micro organisams affect the rate of humus formation.
Time: The length of time the soil forming processes operate, determines the maturation of soils & profile development. 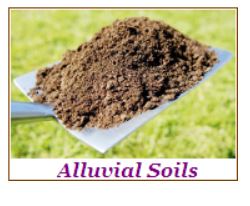 * These soils cover about 40% of the total surface area of the country and are widespread in Northern plains & river valleys.
* These soils vary in nature from sandy loam to clay and are generally rich in potash.
* "Khadar" is the new alluvium which is deposited by floods annually.
* "Bhangar" represents the system of older alluvium deposited away from flood plains.
* The colour of these soils vary from light grey to ash grey.
* These soils are intensively cultivated.

Black Soils:
* It covers most of the Deccan Plateau. 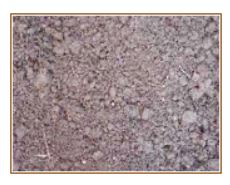 * These soils are also known as "Regular Soil" or "Black cotton Soil".
* These are generally clayey, deep and impermeable.
* Due to the character of slow absorption and loss of moisture, these soils retain the moisture for a very long time which helps the crops to sustain even during dry.
* These are rich in Lime, Iron, Magnesia, Alumina and Potash.
* The colour of the soil varies from deep black to grey.

Red and Yellow Soils:
* Red Soil found in the eastern and southern part of the Deccan Plateau and crystalline in form.
* Yellow soil looks yellow when it occurs in a hydrated form.
* Yellow and red soils are found in Odisha, Chattisgarh and in the southern parts of middle Ganga plain.
* These are poor in fertility. 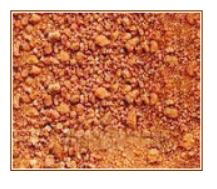 Desertic Soils:
* These soils are sandy in structure and saline in nature.
* These range from red to brown in colour.
* Due to dry climate, high temperature, accelerated evaporation they lack moisture and humus.
* These are developed in western Rajasthan.

* These soils vary in structure and texture depending on the mountain environment where they are formed.
* These are loamy and silty on valley sides and coarse grained in the upper slopes.

Soil Erosion:
* The destruction of the soil cover is described as "Soil erosion."
* The rate of removal of fine particles from the surface is same as the rate addition of particles to the soil layer.
* Wind and water are powerful agents of soil erosion because of their ability to remove soil and transport it.
* Human activities like deforestation and population increase are also responsible for soil erosion.
* Our country is losing about 8,000 hectares of land every years due to Soil erosion.

Soil Degradation:
* Soil erosion and depletion are the major threats to soil as a resource.
* Factors which lead to soil degradation are deforestation, overgrazing, overuse of chemical fertilisers or pesticides, rain wash, land slides and floods.

Soil Conservation measures
(i) Mulching:
* The bare ground between plants is covered with a layer of organic material like straw.
* It helps to retain soil moisture.

(ii) Contour Barriers:
* Stones, grass, soil are used to build barriers along contours.
* Trenches are made infront of barriers to collect water.

(iii) Rock dam:
* Rocks are piled up to slow down the flow of water. Thus prevents gullies and further soil loss.

(iv) Terrace Farming:
* Broad flat steps or terraces are used to grow crops.
* These reduce the surface run-off and the soil erosion.

(v) Inter Cropping:
* Different crops are grown in alternate rows and are sown at different times to protect the soil from rain wash.

Contour ploughing
Ploughing parallel to the contours of a hill slope to form a natural barrier for water to flow down the slope.

Shelter Belts
In the coastal and dry regions, rows of trees are planted to check the wind movement to protect soil cover.