The sun is a star, a hot ball of glowing gases at the heart of our solar system. Its influence extends far beyond the orbits of distant Neptune and Pluto. Without the sun's intense energy and heat, there would be no life on Earth. And though it is special to us, there are billions of stars like our sun scattered across the Milky Way galaxy.
1.The sun is a star. A star does not have a solid surface, but is a ball of gas (92.1 percent hydrogen (H2) and 7.8 percent helium (He)) held together by its own gravity.
2. The sun is the center of our solar system and makes up 99.8% of the mass of the entire solar system
3. If the sun were as tall as a typical front door, Earth would be about the size of a nickel.
4. Since the sun is not a solid body, different parts of the sun rotate at different rates. At the equator, the sun spins once about every 25 Earth days, but at its poles the sun rotates once on its axis every 36 days.
5. The solar atmosphere is where we see features such as sunspots and solar flares on the sun. The sun's outer atmosphere - the corona - extends beyond the orbit of dwarf-planet Pluto. 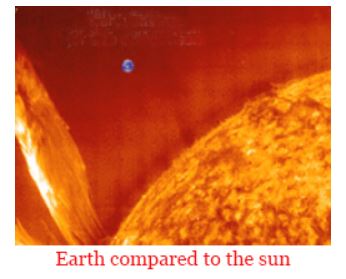 6. The sun is orbited by eight planets, at least five dwarf planets, tens of thousands of asteroids, and hundreds of thousands to three trillion comets and icy bodies.
7. The sun does not have any rings.
8. Spacecraft are constantly increasing our understanding of the sun - from Genesis (which collected samples of the solar wind and returned the particles to Earth) to SOHO, STEREO THEMIS, and many more, which are examining the sun's features, its interior and how it interacts with our planet.
9. Without the sun's intense energy there would be no life on Earth.
10.The temperature at the sun's core is about 15 million degrees Celsius (27 million degrees Fahrenheit).