The Big Bang is actually not a "theory" at all, but rather a scenario or model about the early moments of our universe, for which the evidence is overwhelming. It is a common misconception that the Big Bang was the origin of the universe. In reality, the Big Bang scenario is completely silent about how the universe came into existence in the first place. In fact, the closer we look to time "zero," the less certain we are about what actually happened, because our current description of physical laws do not yet apply to such extremes of nature. The Big Bang scenario simply assumes that space, time, and energy already existed. But it tells us nothing about where they came from or why the universe was born hot and dense to begin with.
But if space and everything with it is expanding now, then the universe must have been much denser in the past. That is, all the matter and energy (such as light) that we observe in the universe would have been compressed into a much smaller space in the past. Einstein's theory of gravity enables us to run the "movie" of the universe backwards—i.e., to calculate the density that the universe must have had in the past. The result: any chunk of the universe we can observe—no matter how large—must have expanded from an infinitesimally small volume of space.

By determining how fast the universe is expanding now, and then "running the movie of the universe" backwards in time, we can determine the age of the universe. The result is that space started expanding 13.77 billion years ago. This number has now been experimentally determined to within 1% accuracy.
It's a common misconception that the entire universe began from a point. If the whole universe is infinitely large today (and we don't know yet), then it would have been infinitely large in the past, including during the Big Bang. But any finite chunk of the universe—such as the part of the universe we can observe today—is predicted to have started from an extremely small volume.
Part of the confusion is that scientists sometimes use the term "universe" when they're referring to just the part we can see "the observable universe". And sometimes they use the term universe to refer to everything, including the part of the universe beyond what we can see.
It's also a common misconception that the Big Bang was an "explosion" that took place somewhere in space. But the Big Bang was an expansion of space itself. Every part of space participated in it. For example, the part of space occupied by the Earth, the Sun, and our Milky Way galaxy was once, during the Big Bang, incredibly hot and dense.

The same holds true of every other part of the universe we can see. We observe that galaxies are rushing apart in just the way predicted by the Big Bang model. But there are other important observations that support the Big Bang.
Astronomers have detected, throughout the universe, two chemical elements that could only have been created during the Big Bang: hydrogen and helium. Furthermore, these elements are observed in just the proportions (roughly 75% hydrogen, 25% helium) predicted to have been produced during the Big Bang. This is the nucleosynthesis of the light elements.
This prediction is based on our well-established understanding of nuclear reactions— independent of Einstein's theory of gravity. Second, we can actually detect the light left over from the era of the Big Bang. This is the origin of the cosmic microwave background radiation. The blinding light that was present in our region of space has long since travelled off to the far reaches of the universe. But light from distant parts of the universe is just now arriving here at Earth, billions of years after the Big Bang. This light is observed to have all the characteristics expected from the Big Bang scenario and from our understanding of heat and light.

The standard Hot Big Bang model also provides a framework in which to understand the collapse of matter to form galaxies and other large-scale structures observed in the Universe today. At about 10,000 years after the Big Bang, the temperature had fallen to such an extent that the energy density of the Universe began to be dominated by massive particles, rather than the light and other radiation which had predominated earlier. This change in the form of matter density meant that the gravitational forces between the massive particles could begin to take effect, so that any small perturbations in their density would grow. Thirteen point eight billion years later we see the results of this collapse in the structure and distribution of the galaxies.
The best estimate of the age of the universe as of 2013 is 13.798 ± 0.037 billion years but due to the expansion of space humans are observing objects that were originally much closer but are now considerably farther away (as defined in terms of cosmological proper distance, which is equal to the co-moving distance at the present time) than a static 13.8 billion light-years distance. The diameter of the observable universe is estimated at about 93 billion light-years (28 billion parsecs), putting the edge of the observable universe at about 46 – 47 billion light-years away. 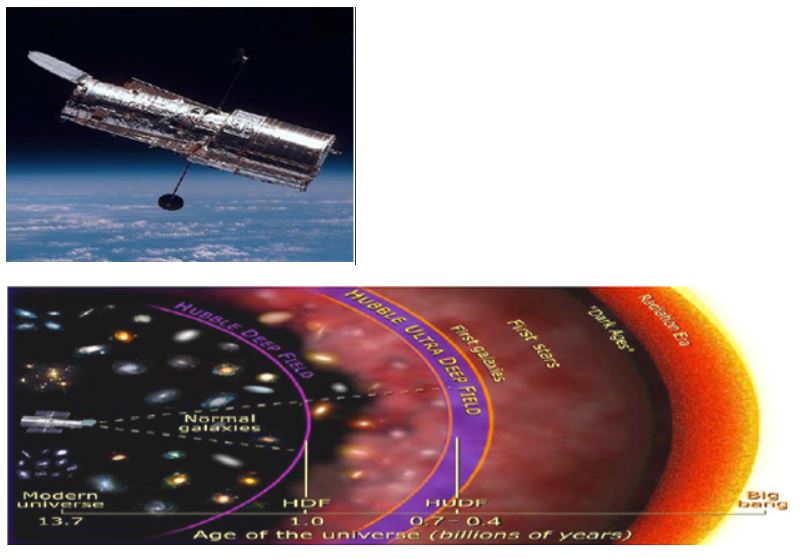