Transport is a system in which passengers and goods are carried from one place to another .Transport routes are the basic economic arteries of the country. Transport system is regarded as the national economy and provides a very important link between production and consumption. The amount of traffic moving in a country is a measure of its progress.
India is a vast country with long distances from Kashmir in the north to kanniyakumari in the south and from kandla in the west to kohima in the east.A well-knit transport system is essential to bring about unity in diversity in the Indian fabric.

RAILWAYS
Indian railway system is the main artery of the country’s inland transport. Railways virtually from the life-line of the country, catering to its needs for large scale movement of traffic, both freight and passenger, thereby contributing to economic growth and also promoting national integration. Railways contribute the backbone of the surface transport system in the country.

DEVELOPMENT AND GROWTH OF INDIAN RAILWAYS
The first railway line in India was opened for public traffic on 16april, 1853 between Mumbai and thane over a distance of 34km. This line was extended to kalyan on 1st may, 1854 and to khopoli on 12th may, 1856. The khandala-Pune section was opened to traffic on 14th June, 1858.
The first section of East India Railway, from Haora to Hugli, a distance of 37km was inaugurated on 15th August, 1854. Mughal Sarai also appeared on the railway map of the India in 1862. The Southern part of the country did not lag behind and got its first 105km long railway line from Royapuram to Arcot in 1856. This line was extended to Kadalundi (near Calicut) on the west coast in 1861. In 1850, the all-rail route between Kolkata and Mumbai started functioning and the main line from Mughal Sarai to Lahore (now in Pakistan) was completed.
At present, India has the second largest railway network in Asia and the fourth largest in the world after the USA, China, Russia. But India tops world’s leading countries with regard to passenger /kilometer carried. It is the largest public sector undertaking of the country comprising a vast network of 6,906 stations spread over a route length of 63,122 km with a fleet of 7,681 locomotives, 39,852 passengers service vehicles, 4,904 other coaching vehicles and 2,14,760 wagons as on 31 March 2003.

FACTORS AFFECTING RAILWAYS
The pattern of Indian Railway network has been influenced by geographical, economic and political factors.
1. Geographical factors:- The North Indian plain with its level land, high density of population and rich agriculture presents the most favorable conditions for the development of railways. The presence of large number of rivers makes it necessary to construct bridges which involve heavy expenditure.
2. Economic factors:- Railways develop more in the economically advanced areas where the need for railway network is felt more.
3. Political and Administrative factors:- The British administration planned the direction and pattern of the railway lines in such a way that they could exploit the valuable raw materials of India for the benefit of their industries and flood the Indian markets with the finished goods from Britain.

DISTRIBUTION OF INDIAN RAILWAYS
1. The North Indian Plain- This region has a dense network of railways from Amritsar to Haora. This is a plain area which is very much suitable for the construction of railways. Large scale urbanization has also helped in the development of the railways. There are a few focal points such as Delhi, Kanpur, Mughal Sarai, Luck now, Agra and Patna.
2. The Peninsular Plateau:- The whole of Peninsular plateau has hilly and plateau terrain which hinders the development of railways. The population density is also moderate.
3. The Himalayan region:- The rugged terrain, hill and valley topography, backward economy and sparse population are the factors responsible for the sparse rail network in this region. There are only three narrow gauge railway lines in the Himalayan region. These are Kalka-Shimla, Pathankot-Kangra and Siliguri-Darjeeling. The Kalka-Shimla Railway built in 1903 winds over a distance of 96.6 km. It has 103 tunnels, totally 8 km in length, the longest tunnel is 1,144 m. The Siliguri -Darjeeling Railway is 82 km long and was constructed in 1878. There is practically no railway line in the north-eastern states of Meghalaya, Tripura, Arunachal Pradesh, Mizoram and Nagaland.
4. The coastal plains:- There is a district contrast in the rail network between eastern coastal plains and western plains. The eastern coastal plain is quite wide and permits the construction of railways, as a result of which, there is a long truck route along the east coast from Kolkata to Chennai. But such a route has been eluding the western coastal plain since long. 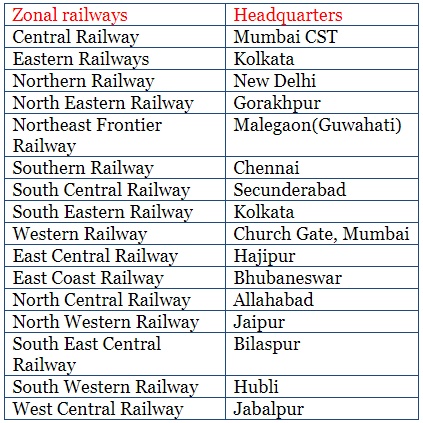