Uranus is the only giant planet whose equator is nearly at right angles to its orbit. A collision with an Earth-sized object may explain the unique tilt. Nearly a twin in size to Neptune, Uranus has more methane in its mainly hydrogen and helium atmosphere than Jupiter or Saturn. Methane gives Uranus its blue tint.
Need-to-know things about Uranus:
1. If the sun were as tall as a typical front door, Earth would be the size of a nickel and Uranus would be about as big as a baseball.
2. Uranus orbits our sun, a star. Uranus is the seventh planet from the sun at a distance of about 2.9 billion km or 19.19 AU.
3. One day on Uranus takes about 17 hours (the time it takes for Uranus to rotate or spin once). Uranus makes a complete orbit around the sun (a year in Uranian time) in about 84 Earth years.
4. Uranus is an ice giant. Most (80 percent or more) of the planet's mass is made up of a hot dense fluid of "icy" materials – water (H2O), methane (CH4). and ammonia (NH3) – above a small rocky core.
5. Uranus has an atmosphere which is mostly made up of hydrogen (H2) and helium (He), with a small amount of methane (CH4).
6. Uranus has 27 moons. Uranus' moons are named after characters from the works of William Shakespeare and Alexander Pope. 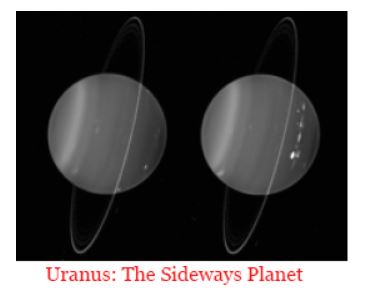 7. Uranus has faint rings. The inner rings are narrow and dark and the outer rings are brightly colored.
8. Voyager 2 is the only spacecraft to have visited Uranus.
9. Uranus cannot support life as we know it.

10. Like Venus, Uranus has a retrograde rotation (east to west). Unlike any of the other planets, Uranus rotates on its side, which means it spins horizontally
The first planet found with the aid of a telescope, Uranus was discovered in 1781 by astronomer William Herschel, although he originally thought it was a comet or star. The seventh planet from the Sun is so distant that it takes 84 years to complete one orbit.
Like Venus, Uranus rotates east to west. Uranus' rotation axis is tilted almost parallel to its orbital plane, so Uranus appears to be rotating on its side. This situation may be the result of a collision with a planet-sized body early in the planet's history, which apparently radically changed Uranus' rotation. Because of Uranus' unusual orientation, the planet experiences extreme variations in sunlight during each 20-year-long season.
Voyager 2, the only spacecraft to visit Uranus, imaged a bland-looking sphere in 1986. When Voyager flew by, the south pole of Uranus pointed almost directly at the sun because Uranus was near its southern summer solstice, with the southern hemisphere bathed in continuous sunlight and the northern hemisphere radiating heat into the blackness of space.

Uranus reached equinox in December 2007, when it was fully illuminated as the sun passed over the planet's equator. By 2028, the north pole will point directly at the sun, a reversal of the situation when Voyager flew by. Equinox also brings ring-plane crossing, when Uranus' rings appear to move more and more edge-on as seen from Earth.
The Hubble Space Telescope and the Keck Observatory in Hawaii captured detailed images of Uranus as the planet approached equinox. While Voyager 2 saw only a few discrete clouds, more recent observations reveal that Uranus exhibits dynamic clouds as it approaches equinox, including rapidly evolving bright features and a new Great Dark Spot like those seen on Neptune.