Venus is a dim world of intense heat and volcanic activity. Similar in structure and size to Earth, Venus' thick, toxic atmosphere traps heat in a runaway 'greenhouse effect.' The scorched world has temperatures hot enough to melt lead. Glimpses below the clouds reveal volcanoes and deformed mountains. Venus spins slowly in the opposite direction of most planets.
Need-to-know things about Venus:
1. Venus is only a little smaller than Earth.
2. Venus is the second closest planet to the sun at a distance of about 108 million km (67 million miles) or 0.72 AU.
One day on Venus lasts as long as 243 Earth days (the time it takes for Venus to rotate or spin once). Venus makes a complete orbit around the sun (a year in Venusian time) in 225 Earth days.
4. Venus is a rocky planet, also known as a terrestrial planet. Venus' solid surface is a cratered and volcanic landscape.
5. Venus' thick and toxic atmosphere is made up mostly of carbon dioxide (CO2) and nitrogen (N2), with clouds of sulfuric acid (H2SO4) droplets. 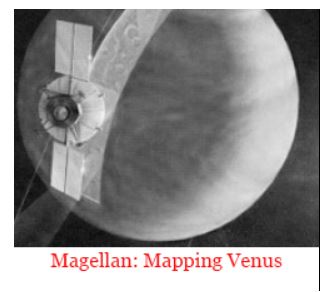 6. Venus has no moons.
7. There are no rings around Venus.
8. More than 40 spacecraft have explored Venus. The Magellan mission in the early 1990s mapped 98 percent of the planet's surface.
9. No evidence for life has been found on Venus. The planet's extreme high temperatures of almost 480 degrees Celsius (900 degrees Fahrenheit) make it seem an unlikely place for for life as we know it.

10. Venus spins backwards (retrograde rotation) when compared to the other planets. This means that the sun rises in the west and sets in the east on Venus.
Venus and Earth are similar in size, mass, density, composition, and gravity. There, however, the similarities end. Venus is covered by a thick, rapidly spinning atmosphere, creating a scorched world with temperatures hot enough to melt lead and surface pressure 90 times that of Earth (similar to the bottom of a swimming pool 1 - 1/2 miles deep). Because of its proximity to Earth and the way its clouds reflect sunlight, Venus appears to be the brightest planet in the sky. 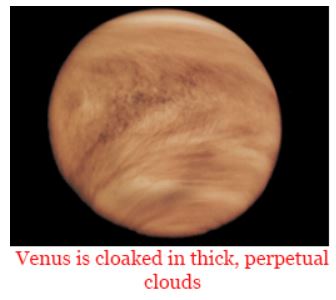 We cannot normally see through Venus' thick atmosphere, but NASA's Magellan mission during the early 1990s used radar to image 98 percent of the surface, and the Galileo spacecraft used infrared mapping to view both the surface and mid-level cloud structure as it passed by Venus on the way to Jupiter. In 2010, infrared surface images by the European Space Agency's Venus Express provided evidence for recent volcanism within the past several hundred thousand years. Indeed, Venus may be volcanically active today.

Like Mercury, Venus can be seen periodically passing across the face of the sun. These "transits" of Venus occur in pairs with more than a century separating each pair. Transits occurred in 1631, 1639; 1761, 1769; and 1874, 1882. On 8 June 2004, astronomers worldwide watched the tiny dot of Venus crawl across the sun; and on 6 June 2012, the second in this pair of transits occurred. The next transit is 11 December 2117. Observing these transits helps us understand the capabilities and limitations of techniques used to find and characterize planets around other stars. 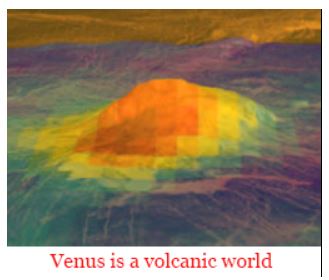 Venus' atmosphere consists mainly of carbon dioxide, with clouds of sulfuric acid droplets. Only trace amounts of water have been detected in the atmosphere. The thick atmosphere traps the sun's heat, resulting in surface temperatures higher than 470 degrees Celsius (880 degrees Fahrenheit). The few probes that have landed on Venus have not survived longer than 2 hours in the intense heat. Sulfur compounds are abundant in Venus' clouds; the corrosive chemistry and dense, moving atmosphere cause significant surface weathering and erosion.