‣ Study blood is called Hematology.
‣ A healthy person has a blood volume of about 5 liters.
‣ Ph = 7.4 (acid status).
‣ Blood has red colour because of the Hemoglobin.
‣ Hemoglobin (Hb) is complex protein found in red blood cells that contains an iron molecule(4 Fe). The main function of hemoglobin is to carry oxygen from the lungs to the body tissues, and to exchange the oxygen for carbon dioxide, and then carry the carbon dioxide back to the lungs and where it is exchanged for oxygen. The iron molecule in hemoglobin helps maintain the normal shape of red blood cells.
‣1 μL = 1/1,000,000 L of blood contains 5,000,000 RBCs and 4,000 – 11,000 WBCs and 150,000 – 450,000 platelets.
‣ Blood circulation is two types. 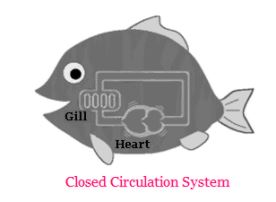 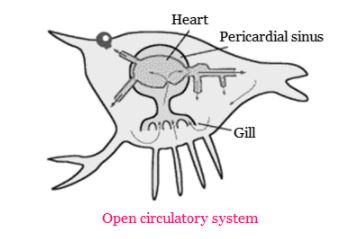 Blood has
a. Plasma
b. Blood cells 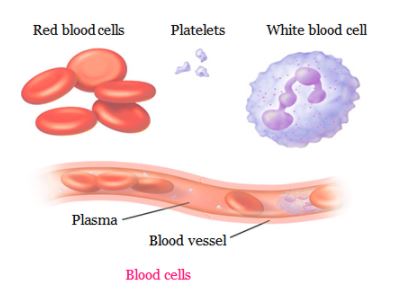 a. Plasma :
Blood plasma is the pale yellow liquid component of blood that normally holds the blood cells in whole blood in suspension; this makes plasma the extracellular matrix of blood cells. It makes up about 55% of the body's total blood volume. It is the intravascular fluid part of extracellular fluid (all body fluid outside of cells). It is mostly water (up to 95% by volume), and contains dissolved proteins (6 – 8%) (i.e serum albumins, globulins, and fibrinogen), glucose, clotting factors, electrolytes (Na+, Ca2+, Mg2+, HCO3−, Cl−, etc.), hormones, and carbon dioxide (plasma being the main medium for excretory product transportation). Plasma also serves as the protein reserve of the human body. It plays a vital role in an intravascular osmotic effect that keeps electrolytes in balanced form and protects the body from infection and other blood disorders.

b. Blood cells: These are 3 types
i. R.B.C
ii. W.B.C
iii. Platelets
i. R.B.C (Erythrocytes):
* Earythrocytes are biconcave disc shape with a diameter of 7.5 μm.
* Very flexible: Folds in order to move through some blood vessels that have a diameter smaller (5.0 mm) than the RBC.
* Membranous “bags” filled with enzymes and Hb: no mitochondria (anaerobic fermentation only), no nucleus or endoplasmic reticulum.
* No protein synthesis to make new enzymes, Hb or membrane components.
* Leads to increased loss of membrane flexibility making older cells more fragile and prone to rupture.
* Life span of an erythrocyte in circulation is 120 days whereby they are removed by macrophages of the spleen and liver. 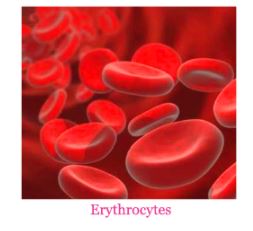 * Erythropoiesis: In a healthy adult, the number of new RBCs entering circulation equals the number of old RBCs removedfrom circulation (approximately 2,500,000 per second).
An increase erythropoiesis is required during times of low oxygen content in blood(hypoxemia) due to -
‣ decreased RBCs (anemia)
‣ decreased oxygen availability (at high altitudes)
‣ increased tissue demand for oxygen (exercising)
* The liver and kidneys secrete the hormone erythropoietin (epo) in response to hypoxemia erythropoietin stimulates the differentiation of hemocytoblasts into erythrocytes
‣ increases RBCs
‣ increases the oxygen carrying ability of the blood

ii. W.B.C (Leucocytes): W.B.C are Primary cells for the immune system response that functions to protect the body from foreign antigens (substances that trigger an immune response). Leukocytes are divided into five classes based on morphological and tinctorial characteristics when stained. The five classes of leukocytes are:
1. 60% Neutrophils
2. 30% Lymphocytes
3. 8% Monocytes
4. 2% Eosinophils
5. 0.4% Basophils

Neutrophils:
Within 12 hours of being discharged from the marrow into the bloodstream, neutrophils migrate into the extravascular tissue.
Tissue neutrophils are activated by chemoattractants at the site of injury. Neutrophils ingest bacteria by phagocytosis and then release enzymes (such as lysozyme) to destroy the bacteria.
They are highest in percentage among the Leucocytes. They are also called the microscopic policemen of the body. They show phagaocyotsis which means cell eating. They kill bacteria and their cells. They provide first defence mechanism against bacteria.

Lymphocytes:
Two main types of lymphocytes are B- cells and T- cells. B- cells are characterized by the presence of immunoglobulins on their surface, and upon stimulation with antigen, they are transformed into plasma cells. Plasma cells are then able to secrete antibodies specific to the antigen. T- cells take part in cell mediated immune response, which does not depend on the presence of circulating antibodies.
These are the smallest cells in size in white blood cells. They are the second highest in percentage present in the leucocytes.

Monocytes:
Monocytes are larger than other leukocytes, and they mature into macrophages once they are released into the bloodstream.
Monocytes then migrate to tissues, particularly the liver, lymph nodes, and lungs, where they may stay for days or years. Here, the monocytes are actively phagocytic, and they ingest particulate matter. Monocytes are also important to the immune response. They ingest and process antigens and are involved in antigen presentation, by B- and T- lymphocytes.
They act as scavenger cells. They remove waste, debris, dead cells etc. They provide second defence mechanism.

Eosinophils:
Eosinophils migrate from the marrow through the blood into the extravascular tissue, and they survive there for weeks. Again, chemoattractants direct the movement of eosinophils, and like neutrophils, eosinophils are phagocytic. They do not ingest organisms, but they do exert cytotoxic effects on them. They are also called as Acidophils.
They give protection against astma, allergy, parasites and toxins.

Basophils:
Basophils are morphologically similar to mast cells, and along with other granulocytes, basophils are motile cells with phagocytic properties. They may migrate into extravascular tissues where they may be stimulated by complexes of antigens that are bound to IgE(immunoglobulin E).
They secrete heparin for local anti-blood coagulation. They are lowest in percentage.

iii. Platelets:
Platelets are only about 20% of the diameter of red blood cells. The normal platelet count is 150,000 - 350,000 per microliter of blood, but since platelets are so small, they make up just a tiny fraction of the blood volume. The principal function of platelets is to prevent bleeding.
Red blood cells are the most numerous blood cell, about 5,000,000 per microliter. Red blood cells make up about 40% of our total blood volume, a measure called the hematocrit. Their color is caused by hemoglobin, which accounts for nearly all of the red cell volume. Hemoglobin is the critical protein that transports oxygen from our lungs to the tissues. Red cells are normally shaped as round, biconcave discs. With microscopic examination, they look like a red or orange tire with a thin, almost transparent center.
White blood cells are the largest of the blood cells but also the fewest. There are only 5,000 to 10,000 white blood cells per microliter. There are several different types of white cells but all are related to immunity and fighting infection.

Platelet Structure:
Platelets are actually not true cells but merely circulating fragments of cells. But even though platelets are merely cell fragments, they contain many structures that are critical to stop bleeding. They contain proteins on their surface that allow them to stick to breaks in the blood vessel wall and also to stick to each other. They contain granules that can secrete other proteins required for creating a firm plug to seal blood vessel breaks. Also platelets contain proteins similar to muscle proteins that allow them to change shape when they become sticky.
They are shaped like a plate, therefore their name. When platelets are stimulated by a break in the blood vessel wall they change shape. They become round and extend long filaments. They may even look like an octopus, with long tentacles reaching out to make contact with the broken blood vessel wall or with other platelets. With these long filaments, platelets then form a plug to seal the broken blood ves.

Platelet Function:
In addition to being the smallest blood cell, platelets are also the lightest. Therefore they are pushed out from the center of flowing blood to the wall of the blood vessel. There they roll along the surface of the vessel wall, which is lined by cells called endothelium. The endothelium is a very special surface, like Teflon, that prevents anything from sticking to it. However when there is an injury or cut, and the endothelial layer is broken, the tough fibers that surround a blood vessel are exposed to the liquid flowing blood. It is the platelets that react first to injury. The tough fibers surrounding the vessel wall, like an envelop, attract platelets like a magnet, stimulate the shape change that is shown in the pictures above, and platelets then clump onto these fibers, providing the initial seal to prevent bleeding, the leak of red blood cells and plasma through the vessel injury. 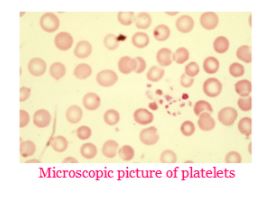 In addition to being the smallest blood cell, platelets are also the lightest. Therefore they are pushed out from the center of flowing blood to the wall of the blood vessel. There they roll along the surface of the vessel wall, which is lined by cells called endothelium. The endothelium is a very special surface, like Teflon, that prevents anything from sticking to it. However when there is an injury or cut, and the endothelial layer is broken, the tough fibers that surround a blood vessel are exposed to the liquid flowing blood. It is the platelets that react first to injury. The tough fibers surrounding the vessel wall, like an envelop, attract platelets like a magnet, stimulate the shape change that is shown in the pictures above, and platelets then clump onto these fibers, providing the initial seal to prevent bleeding, the leak of red blood cells and plasma through the vessel injury.
The color photograph is a microscopic picture of a drop of blood spread out onto a glass slide. The magnification is not as high as the pictures above, so the platelets seem very small. It can be seen that as the platelets touch the glass, they begin to stick together forming a long string. This illustrates the basic function of platelets, to stick to any foreign surface and then to stick together. The red blood cells in this picture are normal, with their round shape and their thin center.

Disorders of Platelet Function:
The most common disorder of platelet function is caused by aspirin. Aspirin blocks one of the steps required for platelets to stick together. This effect of aspirin is what makes it an effective treatment for patients who have disorders of blood clotting or thrombosis. For example, a person coming to an emergency room with severe chest pain and a suspected heart attack is immediately given aspirin. This prevents some of the platelet clumping which can obstruct the blood flow to the heart. Aspirin is an effective medicine to prevent these clots, but it does not totally paralyze the platelet. Therefore many people take daily aspirin and have no problems with bleeding. However aspirin can be potentially dangerous in patients who already have a risk for bleeding, such as boys with hemophilia or patients who have too few platelets and depend on each platelet having full function.

Disorders of Platelets Number: Too Many Platelets
Rare conditions result in the bone marrow producing too many platelets, sometimes as many as one million or two million per microliter. In some of these patients, there are increased risks for blood clots, but many patients with these disorders have no problems.

Disorders of Platelet Number: Too Few Platelets
Disorders with low platelet counts are called thrombocytopenias, a term derived from an old name for platelets, “thrombocytes”. This name describes the platelets as the cells (“cytes” is a word for cell) that contribute to thrombosis, or blood clotting. The last part of the word, “penia”, refers to too few cells.