FUNCTIONAL ANATOMY OF THE RESPIRATORY SYSTEM

I. Nose:
The nose is the only part of the respiratory system that you can see. It is where air enters but it is also where air is warmed, made moist, filtered and cleaned, and 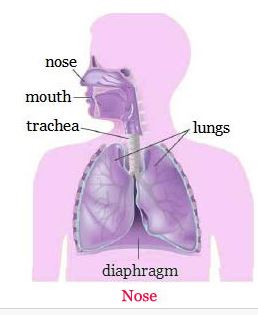 smelled (olfaction). In snakes olfaction part is Jacobson organ. These organs are more developed in snakes, dogs and rats. Because of this, these find earth quakes and dogs find the criminals.

The Study of nose is called Rinalogy. Cold causes by rhinovirus.
Rhinoceros: Hair on nose is developed as a horn.

II. Nasal cavity:
The term "nasal cavity" can refer to each of the two sides of the nose or to the two sides combined, the former usage being more commonly applied to living persons and the latter usage being more commonly applied to dried skull anatomy. The two nasal cavities condition the air to be received by the other areas of the respiratory tract. Owing to the large surface area provided by the nasal conchae, the air passing through the nasal cavity is warmed or cooled to within 1 degree of body temperature.
In addition, the air is humidified, dust and other particulate matter is removed by vibrissae, short, thick hairs, present in the vestibule. The entire mucosa of the nasal fossae is covered by a blanket of mucus, which lies superficial to the microscopic cilia and also filters inspired air, the cilia of the respiratory epithelium move the secreted mucus and particulate matter posteriorly towards the pharynx where it passes into the esophagus and is digested in the stomach. The nasal cavity also houses our sense of smell and contributes greatly to taste sensation through its posterior communication with the mouth via the choanae. 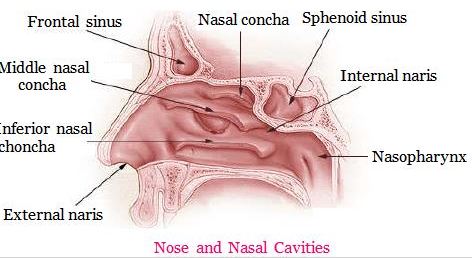 The wall of each nasal cavity is mainly made up by the maxilla, however there is a deficiency that is compensated by the perpendicular plate of the palatine bone, the medial pterygoid plate, the labyrinth of ethmoid and the inferior concha. The paranasal sinuses are connected to the nasal cavity through small orifices called Ostia.

III. Pharynx:
Pharynx connects the nasal cavity and mouth to the larynx and esophagus. The pharynx is just a passageway for air to pass through, but it is ringed by tonsils that trap and kill bacteria that come in with the air.
The pharynx, also known as the throat, is a muscular funnel that extends from the posterior end of the nasal cavity to the superior end of the esophagus and larynx.
The pharynx is divided into 3 regions:
a. Nasopharynx
b. Oropharynx
c. Laryngopharynx.
The nasopharynx is the superior region of the pharynx found in the posterior of the nasal cavity. Inhaled air from the nasal cavity passes into the nasopharynx and descends through the oropharynx, located in the posterior of the oral cavity. Air inhaled through the oral cavity enters the pharynx at the oropharynx. The inhaled air then descends into the laryngopharynx, where it is diverted into the opening of the larynx by the epiglottis. 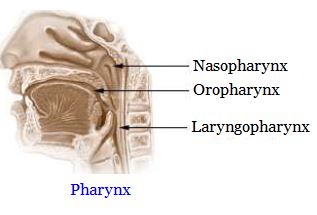 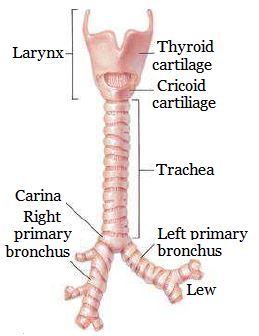 The epiglottis is one of the cartilage pieces of the larynx and serves as the cover of the larynx during swallowing. Inferior to the epiglottis is the thyroid cartilage, which is often referred to as the Adam’s apple as it is most commonly enlarged and visible in adult males. The thyroid holds open the anterior end of the larynx and protects the vocal folds. Inferior to the thyroid cartilage is the ring-shaped cricoids cartilage which holds the larynx open and supports its posterior end.
In addition to cartilage, the larynx contains special structures known as vocal folds, which allow the body to produce the sounds of speech and singing. The vocal folds are folds of mucous membrane that vibrate to produce vocal sounds. The tension and vibration speed of the vocal folds can be changed to change the pitch that they produce.

V. Trachea:
The trachea, or windpipe, is a 5-inch long tube made of C-shaped hyaline cartilage rings lined with pseudo stratified ciliated columnar epithelium. The trachea connects the larynx to the bronchi and allows air to pass through the neck and into the thorax. The rings of cartilage making up the trachea allow it to remain open to air at all times. The open end of the 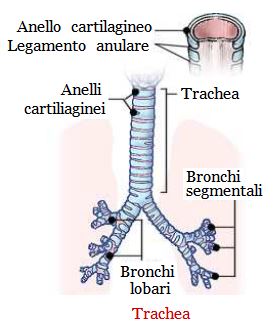 cartilage rings faces posteriorly toward the esophagus, allowing the esophagus to expand into the space occupied by the trachea to accommodate masses of food moving through the esophagus.
The main function of the trachea is to provide a clear airway for air to enter and exit the lungs. In addition, the epithelium lining the trachea produces mucus that traps  dust and other contaminants and prevents it from reaching the lungs. Cilia on the surface of the epithelial cells move the mucus superiorly toward the pharynx where it can be swallowed and digested in the gastrointestinal tract.

VI. Bronchi and Bronchioles:
At the inferior end of the trachea, the airway splits into left and right branches known as the primary bronchi. The left and right bronchi run into each lung before branching off into smaller secondary bronchi. The secondary bronchi carry air into the lobes of the lungs 2 in the left lung and 3 in the right lung. The secondary bronchi in turn split into many smaller tertiary bronchi within each lobe. The tertiary bronchi split into many smaller bronchioles that spread throughout the lungs. Each bronchiole further splits into many smaller branches less than a millimeter in diameter called terminal bronchioles. Finally, the millions of tiny terminal bronchioles conduct air to the alveoli of the lungs.
As the airway splits into the tree-like branches of the bronchi and bronchioles, the structure of the walls of the airway begins to change. The primary bronchi contain many Cshaped cartilage rings that firmly hold the airway open and give the bronchi a cross-sectional shape like a flattened circle or a letter D. As the bronchi branch into secondary and tertiary bronchi, the cartilage becomes more widely spaced and more smooth muscle and elastin protein is found in the walls. The bronchioles differ from the structure of the bronchi in that they do not contain any cartilage at all. The presence of smooth muscles and elastin allow the smaller bronchi and bronchioles to be more flexible and contractile. 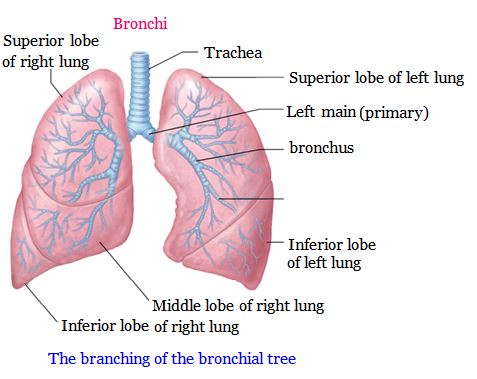 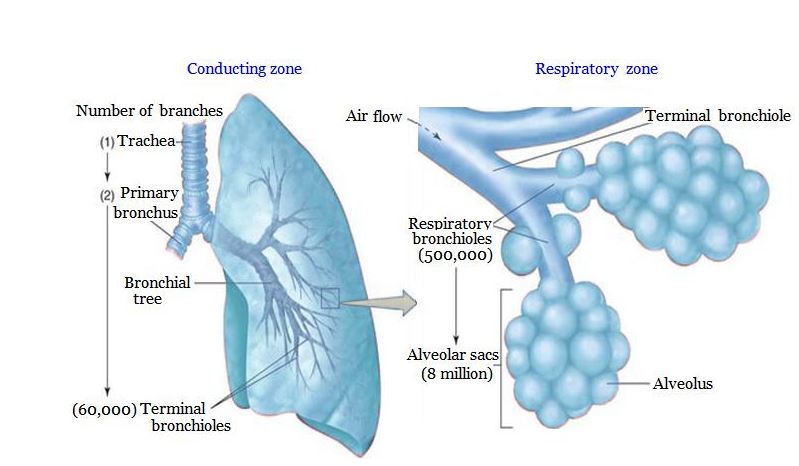