1. First generation bio fuels
The first generation biofuels refer to the fuels that have been derived from sources like starch, sugar, animal fats and vegetable oil. The oil is obtained using the conventional techniques of production.

i. Ethanol fuel
Biologically produced alcohols, most commonly ethanol, and less commonly propanol and butanol, are produced by the action of microorganisms and enzymes through the fermentation of sugars or starches or cellulose. Biobutanol or biogasoline is often claimed to provide a direct replacement for gasoline, because it can be used directly in a gasoline engines. 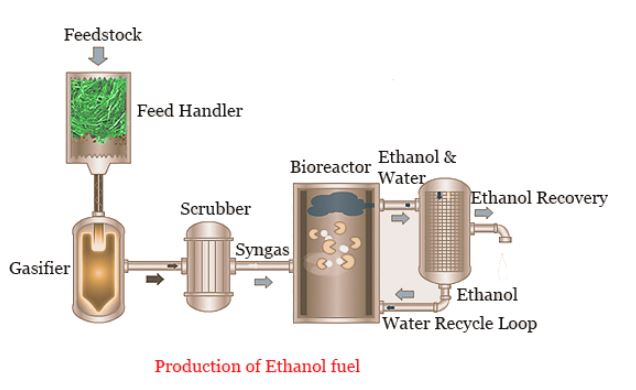 * It is the most common biofuel worldwide, particularly in Brazil.
* It can be used in petrol engines as a replacement for gasoline; it can be mixed with gasoline to any percentage.
* It has a smaller energy density than that of gasoline; this means it takes more fuel (volume and mass) to produce the same amount of work.
* It is also used to fuel bioethanol fireplaces.

* Biodiesel can be used in any diesel engine when mixed with mineral diesel.
* Biodiesel is also safe to handle and transport because it is non-toxic and biodegradable, and has a high flash point of about 300oF (148oC) compared to petroleum diesel fuel, which has a flash point of 125oF (52oC).

iii. Alcohol fuel
Throughout history, alcohols have been used as a fuel. The first four aliphatic alcohols (methanol, ethanol, propanol, and butanol) are of interest as fuels because they can be synthesized chemically or biologically, and they have characteristics which allow them to be used in internal combustion engines. The general chemical formula for alcohol fuel is CnH2n+1OH.

Most methanol is produced from natural gas, although it can be produced from biomass using very similar chemical processes. Ethanol is commonly produced from biological material through fermentation processes. However, ethanol that is derived from petroleum should not be considered safe for consumption as the mixture contains about 5% methanol and may cause blindness or death. Biobutanol has the advantage in combustion engines in that its energy density is closer to gasoline than the simpler alcohols. However, biobutanol is currently more difficult to produce than ethanol or methanol. When obtained from biological materials and/or biological processes, they are known as bioalcohols.

iv. Green diesel
Green diesel is produced through hydrocracking biological oil feedstocks, such as vegetable oils and animal fats. Hydrocracking is a refinery method that uses elevated temperatures and pressure in the presence of a catalyst to break down larger molecules, such as those found in vegetable oils, into shorter hydrocarbon chains used in diesel engines. It may also be called renewable diesel, hydrotreated vegetable oil or hydrogen-derived renewable diesel. 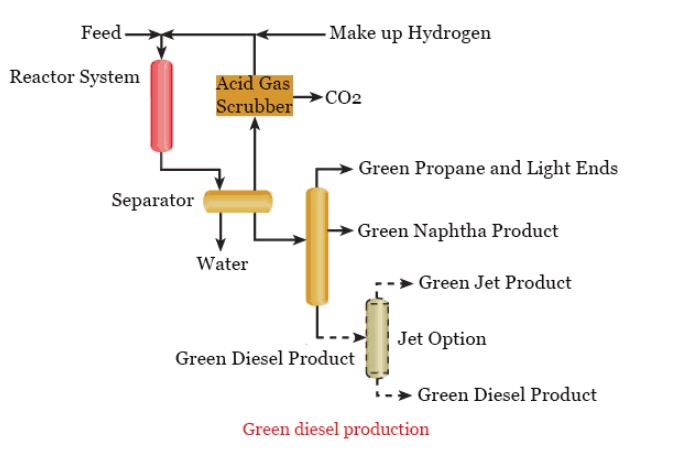 Green diesel has the same chemical properties as petroleum-based diesel. It does not require new engines, pipelines or infrastructure to distribute and use, but has not been produced at a cost that is competitive with petroleum. Gasoline versions are also being developed. Green diesel is being developed in Louisiana and Singapore by Conoco Phillips.

v. Biofuel gasoline
Biogasoline is gasoline produced from biomass such as algae. Like traditionally produced gasoline, it contains between hexane and dodecane carbon atoms per molecule and can be used in internal-combustion engines. Biogasoline is chemically different from biobutanol and bioethanol, as these are alcohols, not hydrocarbons.

BG100, or 100% biogasoline, can immediately be used as a drop-in substitute for petroleum gasoline in any conventional gasoline engine, and can be distributed in the same fueling infrastructure, as the properties match traditional gasoline from petroleum. Dodecane requires a small percentage of octane booster to match gasoline. Ethanol fuel (E85) requires a special engine and has lower combustion energy and corresponding fuel economy.

Vegetable oils are composed of triglycerides, as contrasted with waxes which lack glycerin in their structure. Although many plant parts may yield oil in commercial practice, oil is extracted primarily from seeds.

vii. Bioethers
Bioethers or fuel ethers or oxygenated fuels are cost-effective compounds that act as octane rating enhancers. These are produced by the reaction of reactive iso-olefins, such as iso-butylene, with bioethanol and are created by wheat or sugar beet.
They also enhance engine performance, whilst significantly reducing engine wear and toxic exhaust emissions. Though bioethers are likely to replace petroethers in the UK, it is highly unlikely they will become a fuel in and of itself due to the low energy density.

viii. Biogas
This is produced when bacteria decompose organic material such as garbage and sewage, especially in the absence of oxygen. Biogas is a mixture of about 60 percent methane and 40 percent Carbon dioxide.

Methane is the main component of natural gas. It is relatively clean burning, colorless, and odorless. This gas can be captured and burned for cooking and heating. This is already being done on a large scale in some countries of the world. Farms that produce a lot of manure, such as hog and dairy farms, can use biogas generators to produce methane.

ix. Synthesis gas
Synthesis gas or syngas is defined as a gas that contains H2 and CO as main combustible components. Raw syngas mostly inevitably contains also considerable amounts of CO2 and H2O. Since syngas generally is used for the synthesis of chemicals and fuels at elevated pressures, the concentration of N2 in syngas usually should be minimised. Bio-syngas is chemically identical to syngas, but is produced from biomass. 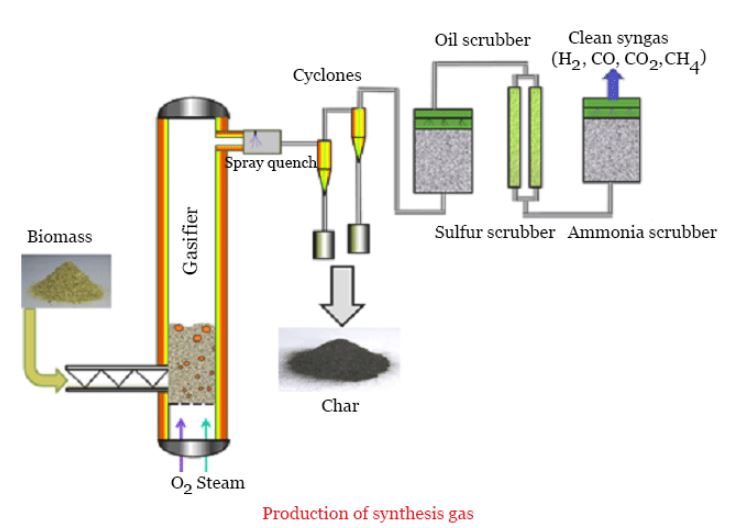 Syngas is chemically different from gases that normally are produced by low-temperature gasification processes such as fluidised bed reactors. For clarity, the gas produced by these kind of reactors is called "product gas" in this report. Product gas is defined as a combustible gas that contains H2 and CO, but also considerable amounts of hydrocarbons like methane. Product gas also inevitably contains CO2 and H2O and often N2.

x. Solid biofuels
Humans have been using solid biofuels for heat and for cooking since dawn of civilization. Wood, sawdust, leaves can all constitute biofuels. Many of the biomass sources for solid biofuels are already in convenient form for combustion. A few others like sawdust and wood needs compacting, sometimes along with a binding agent so that it is easier to store, transport and use this biofuel. Pellets or briquettes are common forms of such densified biomass.
There is no production necessary for a solid biofuels in most cases because it is often in a convenient form. On the other hand, sawdust and wood chips are not so convenient and so they are often put through a process known as "densifying." All this means is that the biomass  is compressed into a form that is easier to handle or is mixed with some sort of bonding agent to hold it together for easier transport, storage, and use. Pellets and bricks are common "densified" forms of solid biomass. 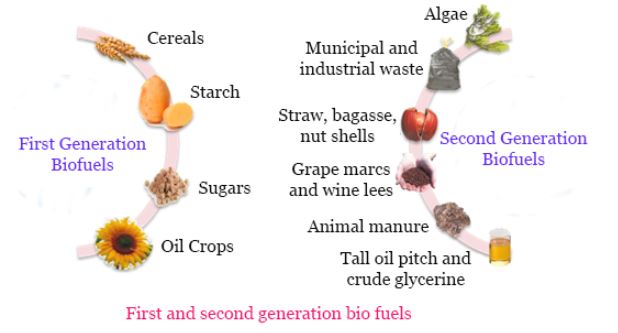 The goal of second generation biofuel processes is to extend the amount of biofuel that can be produced sustainably by using biomass consisting of the residual non-food parts of current crops, such as stems, leaves and husks that are left behind once the food crop has been extracted, as well as other crops that are not used for food purposes (non-food crops), such as switchgrass, grass, jatropha, whole crop maize, miscanthus and cereals that bear little grain, and also industry waste such as woodchips, skins and pulp from fruit pressing, etc.
The problem that second generation biofuel processes are addressing is to extract useful feedstocks from this woody or fibrous biomass, where the useful sugars are locked in by lignin, hemicellulose and cellulose. All plants contain lignin, hemicellulose and cellulose. These are complex carbohydrates. Lignocellulosic ethanol is made by freeing the sugar molecules from cellulose using enzymes, steam heating, or other pre-treatments. These sugars can then be fermented to produce ethanol in the same way as first generation bioethanol production. The by-product of this process is lignin. Lignin can be burned as a carbon neutral fuel to produce heat and power for the processing plant and possibly for surrounding homes and businesses.