There are 3 types of Therapeutic Instruments. They are

1. Pacemaker
A pacemaker is a small device that's placed in the chest or abdomen to help control abnormal heart rhythms. This device uses electrical pulses to prompt the heart to beat at a normal rate. Pacemakers are used to treat arrhythmias (ah-RITH-me-ahs). Arrhythmias are problems with the rate or rhythm of the heartbeat. During an arrhythmia, the heart can beat too fast, too slow, or with an irregular rhythm. A heartbeat that's too fast is called tachycardia. A heartbeat that's too slow is called bradycardia. During an arrhythmia, the heart may not be able to pump enough blood to the body. This can cause symptoms such as fatigue (tiredness), shortness of breath, or fainting. Severe arrhythmias can damage the body's vital organs and may even cause loss of consciousness or death. 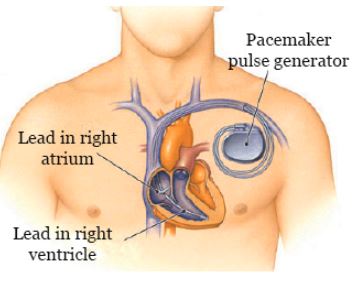 A pacemaker can relieve some arrhythmia symptoms, such as fatigue and fainting. A pacemaker also can help a person who has abnormal heart rhythms resume a more active lifestyle. It was developed by chardak (1960).

2. Angioplasty
Angioplasty (or Balloon angioplasty) is an endovascular procedure to widen narrowed or obstructed arteries or veins, typically to treat arterial atherosclerosis.
An empty, collapsed balloon, known as a balloon catheter, is passed over a wire into the narrowed locations and then inflated to a fixed size. The balloon forces expansion of the stenosis (narrowing) within the vessel and the surrounding muscular wall, opening up the blood vessel for improved flow, and the balloon is then deflated and withdrawn. A stent may or may not be inserted at the time of ballooning to ensure the vessel remains open.

3. Artificial arteries
Artificial arteries could be used in bypass operations in as little as five years, say the researchers.  The work, led by Dr Laura Niklason, from Duke University Medical Center in Durham, New Carolina, US, overcomes a major obstacle to growing new blood vessels for patients who need them most.