These plant parameters help plants control rates of transpiration by serving as forms of resistance to water movement out of the plant. Stomata are pores in the leaf that allow gas exchange where water vapor leaves the plant and carbon dioxide enters. Special cells called guard cells control each pore’s opening or closing. When stomata are open, transpiration rates increase when they are closed transpiration rates decrease. 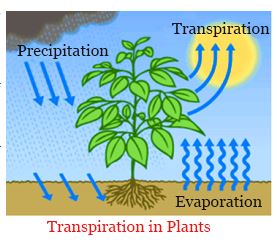 Plants can alter the size of their boundary layers around leaves through a variety of structural features. Leaves that possess many hairs or pubescence will have larger boundary layers; the hairs serve as mini-wind breaks by increasing the layer of still air around the leaf surface and slowing transpiration rates. Some plants possess stomata that are sunken into the leaf surface, dramatically increasing the boundary layer and slowing transpiration. Boundary layers increase as leaf size increases, reducing rates of transpiration as well. For example, plants from desert climates often have small leaves so that their small boundary layers will help cool the leaf with higher rates of transpiration.
The cuticle is the waxy layer present on all above-ground tissue of a plant and serves as a barrier to water movement out of a leaf. Because the cuticle is made of wax, it is very hydrophobic or ‘water-repelling’; therefore, water does not move through it very easily. The thicker the cuticle layer on a leaf surface, the slower the transpiration rate. Cuticle thickness varies widely among plant species. In general, plants from hot, dry climates have thicker cuticles than plants from cool, moist climates. In addition, leaves that develop under direct sunlight will have much thicker cuticles than leaves that develop under shade conditions.

Plants cannot continue to transpire without wilting if the soil is very dry because the water in the xylem that moves out through the leaves is not being replaced by the soil water. This condition causes the leaf to lose turgor or firmness, and the stomata to close. If this loss of turgor continues throughout the plant, the plant will wilt.
Stomata are triggered to open in the light so that carbon dioxide is available for the light-dependent process of photosynthesis. Stomata are closed in the dark in most plants. Very low levels of light at dawn can cause stomata to open so they can access carbon dioxide for photosynthesis as soon as the sun hits their leaves. Stomata are most sensitive to blue light, the light predominating at sunrise.
Wind can alter rates of transpiration by removing the boundary layer, that still layer of water vapor hugging the surface of leaves. Wind increases the movement of  water from the leaf surface when it reduces the boundary layer, because the path for water to reach the atmosphere is shorter.