Photosynthesis is the process by which plants and some bacteria use the energy from sunlight to produce sugar, which cellular respiration converts into ATP, the "fuel" used by all living things. The conversion of unusable sunlight energy into usable chemical energy, is associated with the actions of the green pigment chlorophyll. Most of the time, the photosynthetic process use water and releases the oxygen that we absolutely must have to stay alive.
6H2O + 6CO2  →  C6H12O6 + 6O2
Approximately 40% of the radiant energy reaching Earth is in the form of visible light. If visible light passes through a prism, the component colors become apparent. These range from red at one end of the visible band to blue-violet at the other end. The wavelengths of visible light range from 380 nm (violet) to 760 nm (red) and are the wavelengths most important to living organisms.

a. Light Absorbing Pigments:
When light strikes an object, the light can pass through the object, be reflected from the surface, or be absorbed. 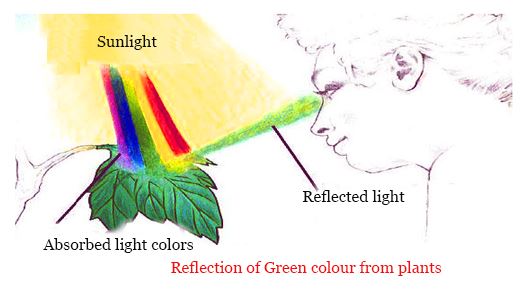 In higher plants, the major organ of photosynthesis is the leaf, and the green chloroplasts within the mesophyll are the actual sites of this process. The major photosynthetic pigments are the green chlorophylls, which are located on the thylakoid membranes of the chloroplasts. Thylakoids can be found in stacks, known as grana, as well as individually in the stroma, the enzyme-rich ground substance of the chloroplast. Chloroplasts may have 50 to 80 grana, each with about 10 to 30 thylakoids. The chlorophylls can be located on the stroma thylakoids as well as in the grana, and it is the abundance of these pigments that makes leaves appears green.
In green plants there are two forms of chlorophyll, a and b,which differ slightly in chemical makeup. Most chloroplasts have three times more chlorophyll a than b. The absorption spectra of the chlorophylls show peak absorbance in the red and blue-violet regions, with much of the yellow and green light reflected. Other forms of chlorophyll and other photosynthetic pigments occur in the algae. In addition to chlorophylls, chloroplasts also contain carotenoids. These include the orange carotenes and yellow xanthophylls, which absorb light in the violet, blue, and bluegreen regions of the spectrum. Carotenoids are called accessory pigments, and the light energy absorbed by these pigments is transferred to chlorophyll for photosynthesis. Although present in all leaves, carotenoids are normally masked by the chlorophylls.

b. Leaves and Leaf Structure
A leaf is made of many layers that are sandwiched between two layers of tough skin cells (called the epidermis). The epidermis also secretes a waxy substance called the cuticle. These layers protect the leaf from insects, bacteria, and other pests. Among the epidermal cells are pairs of sausage-shaped guard cells. Each pair of guard cells forms a pore (called stomata; the plural is stomata). Gases enter and exit the leaf through the stomata. 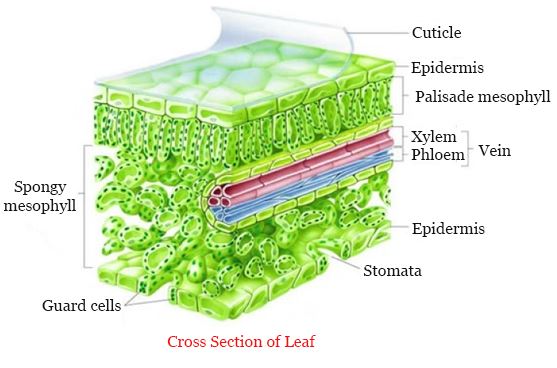 Leaves are vital to the survival of plants. They help plants in a variety of ways, including producing food and oxygen through photosynthesis, balancing water loss, regulating gas exchange and transporting the products of photosynthesis. Because of the vast array of jobs that leaves perform, there are many specialized structures. We will look at these parts of the leaf and relate them to their functions.

Cuticle and Epidermis:
Just like our skin helps protect us, leaves have an outer layer that protects them. This outermost layer is called the cuticle. It is generally waxy to protect the leaf and prevent water loss. When you touch a leaf, you may feel this waxy coating, and on some plants, such as holly, you may actually be able to see the waxy coat shine a bit.
Below the cuticle is the epidermis. On the top of the leaf, this is known as the upper epidermis. This is a single layer of cells found directly below the cuticle. It helps protect the leaf by aiding in preventing water loss and providing an extra layer between the outside and inside of the leaf.
Plant epidermis is unique because it is actually two different layers of cells: the upper epidermis and the lower epidermis. Sandwiched in between these two layers are two other important tissue systems - the vascular tissue system and the ground tissue system.

The vascular tissue system provides water and nutrient transport from the roots to other parts of the plant. The ground tissue system, also called the mesophyll, is specialized for photosynthesis, the process by which the plant converts sunlight into usable chemical energy.
Epidermis cells protect internal tissues from the outside world by creating a barrier. When stomata open to exchange gases during photosynthesis water is also lost through these small openings by evaporation. Plants do not like losing water, and waxy cuticle of epidermis helps minimize this loss keeping plants from drying out.

Palisade Mesophyll:
The leaf is arranged like a layered cake. It has a spongy layer, a palisade layer that consists of parenchyma cells and is where photosynthesis happens and an outer layer (the epidermis) with little holes (stomata).
The inside cake layers are made up of parenchyma cells. This tissue is called the mesophyll, meaning "middle leaf," and comes in two flavors: the palisade mesophyll (sometimes called palisade parenchyma) and the spongy mesophyll. Most photosynthesis takes place in the palisade mesophyll, which is conveniently located at the top of the leaf just under the epidermis. Palisade parenchyma cells are long, bunched closed together, and look like sausages hanging from the ceiling in a butcher’s shop.

Spongy mesophyll:
Spongy mesophyll cells are not packed so tightly together, which allows carbon dioxide and oxygen to reach the palisade cells where they are needed in photosynthesis. Spongy mesophyll cells and guard cells also get some photosynthetic action.
The cells are more ball-shaped than cylindrical-shaped like the cells in the palisade layer. The large air pockets allow for gas exchange between different areas of the leaf. The cells in this layer contain few chloroplasts and are therefore not generally responsible for photosynthesis. This makes sense, as the layer is further into the leaf and will therefore not get as much sun as the palisade layer, which is closer to the leaf surface. Within the spongy layer are a few other components of the leaf. Along with the air pockets for the exchange of gasses are vascular bundles that contain xylem and phloem. 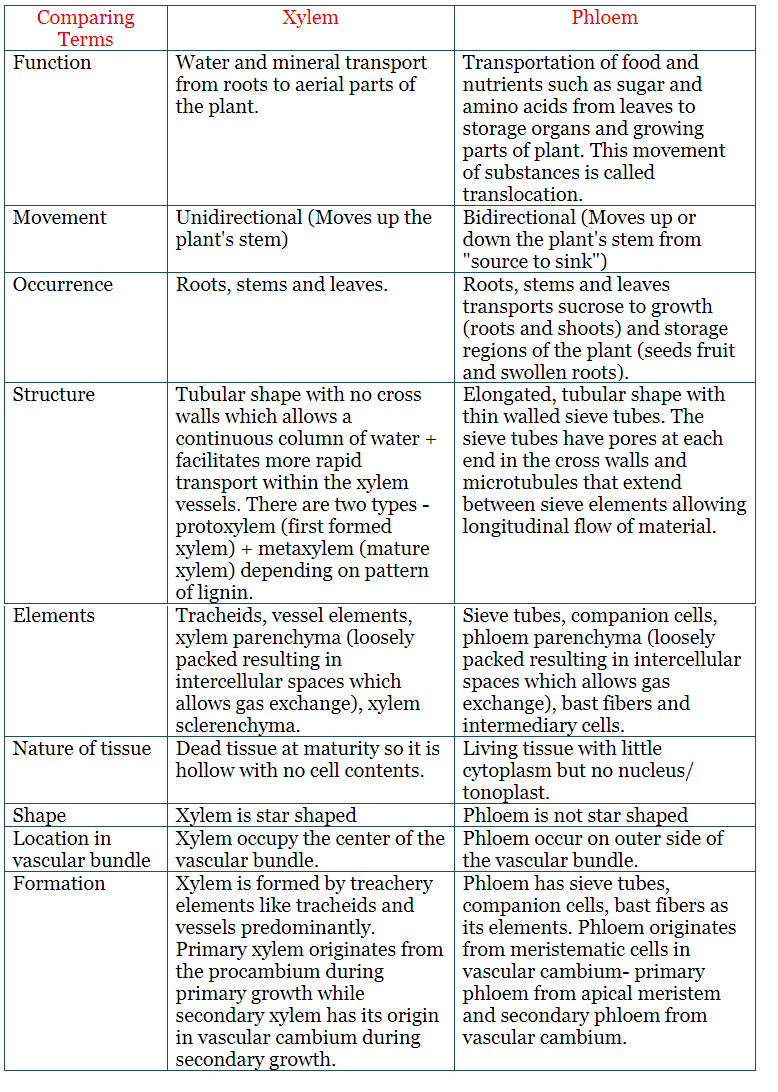 The Calvin Cycle
The source of carbon used in the photosynthetic manufacture of sugars is carbon dioxide from the atmosphere. This gas makes up just a tiny fraction, approximately 0.035%, of Earth’s atmosphere and enters the leaf by diffusing through the stomata. The reactions that involve the fixation and reduction of CO2 to form sugars are known as the Calvin Cycle and are sometimes referred to as the C3 Pathway. These reactions utilize the ATP and NADPH produced in the light reactions but do not involve the direct participation of light and are hence sometimes referred to as light-independent reactions or dark reactions. The Calvin Cycle takes place in the stoma of the chloroplasts, which contains the enzymes that catalyze the many reactions in the cycle.  The end product of this pathway is the synthesis of a six-carbon Sugar, this requires the input of carbon dioxide. Six turns of the cycle are needed to incorporate six molecules of CO2 into a single molecule of a six-carbon sugar. The initial event is the fixation or addition of CO2 to ribulose-1, 5-bisphosphate (RUBP), a five-carbon sugar with two phosphate groups. This carboxylation reaction is catalyzed by the enzyme ribulose bisphosphate carboxylase (RUBISCO). In addition to its obvious importance to photosynthesis, RUBISCO appears to be the most abundant protein on Earth since it constitutes 12.5% to 25% of total leaf protein.

The product of the carboxylation is an unstable six-carbon intermediate that immediately splits into two molecules of a three-carbon compound, with one phosphate group called phosphoglyceric acid (PGA), or phosphoglycerate. Six turns of the cycle would yield 12 molecules of PGA.
The 12 PGA molecules are converted into 12 molecules of glyceraldehyde phosphate, or phosphoglyceraldehyde (PGAL). This step requires the input of 12 NADPH + H+ and 12 ATP (both generated during the light reactions), which supply the energy for this reaction. Ten of the 12 glyceraldehyde phosphate molecules are used to regenerate the six molecules of RUBP in a complex series of interconversions that require six more ATP and allow the cycle to continue. Two molecules of glyceraldehyde phosphate are the net gain from six turns of the Calvin Cycle; these are converted into one molecule of fructose-1, 6-bisphosphate, which is soon converted to glucose. The glucose produced is never stored as such but is converted into starch, sucrose, or a variety of other products, thus completing the conversion of solar energy into chemical energy.
The complex steps of photosynthesis can be summarized in the following simple equation, which considers only the raw materials and end products of the process.

Variation to Carbon Fixation:
Many plants utilize a variation of carbon fixation that consists of a prefixation of CO2 before the Calvin Cycle. There are two pathways in which this prefixation occurs, the C4 Pathway and the CAM Pathway. The C4 pathway occurs in several thousand species of tropical and subtropical plants, including the economically important crops of corn, sugarcane, and sorghum. This pathway, occurring in mesophyll cells, consists of incorporating CO2 into organic acids, resulting in a four-carbon compound and, hence, the name of the pathway. This compound is soon broken down to release CO2 to the Calvin Cycle, which occurs in cells surrounding the vascular bundle. The C4 pathway ensures a more efficient delivery of CO2 for fixation and greater photosynthetic rates under conditions of high light intensity, high temperature, and low CO2 concentrations.
These same steps are part of the CAM (Crassulacean Acid Metabolism) pathway, which functions in a number of cacti and succulents, plants of desert environments. This pathway was initially described among members of the plant family Crassulaceae. CAM plants are unusual in that their stomata are closed during the daytime but open at night. Thus, they fix CO2 during the nighttime hours, incorporating it into four-carbon organic acids. During the daylight hours, these compounds are broken down to release CO2 to continue on into the Calvin Cycle. This alternate pathway allows carbon fixation to occur at night when transpiration rates are low, an obvious advantage in hot, dry desert environments.

Stomata: Plants 'breathe' through tiny openings in leaves called stomata. Stomata open and close to allow the intake of carbon dioxide and the release of oxygen.
The gas exchange that occurs when stomata are open facilitates photosynthesis. During photosynthesis, carbon dioxide is taken in from the atmosphere through the stomata and oxygen is released as a waste product. Both photosynthesis and the gas exchange that powers it are essential to the plant's survival.
An unfortunate side effect of the stomata opening is that it allows for water loss. Unlike human, plants do not need to sweat to cool off and prefer to keep their water inside; however, because the gas exchange of photosynthesis is so vital, some water loss through stomata is necessary. This process of plant water loss is called transpiration.

Guard Cells:
Surrounding each stomata are two guard cells, which regulate the opening and closing of stomata to facilitate gas exchange and control transpiration in plants. Guard cells are able to control how open or closed stomata are by changing shape. They are like an inflatable set of doors that make the opening between the two cells wider or narrower. The guard cells change shape depending on the amount of water and potassium ions present in the cells themselves.

When the guard cells take in potassium ions, water diffuses into the cells by osmosis. Osmosis is the movement of water from an area of low concentration of solute (dissolved substance) to an area of high concentration of solute. When the water enters the cells, they swell and become bowed. This causes the guard cells to bend away from each other, thereby opening the stomata. 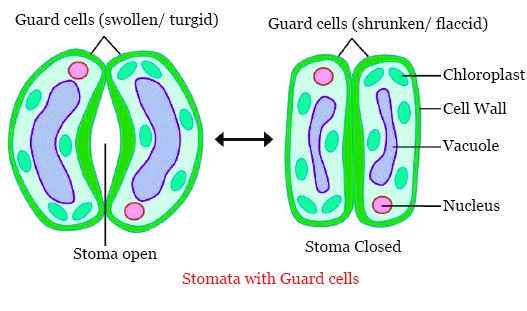