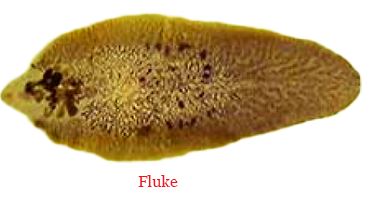 The trematodes or flukes include 18,000 to 24,000 species, divided into two subclasses. Nearly all trematodes are parasites of mollusks and vertebrates. The smaller Aspidogastrea, comprising about 100 species, are obligate parasites of mollusks and may also infect turtles and fish, including cartilaginous fish. The Digenea, the majority of trematodes, are obligate parasites of both mollusks and vertebrates, but rarely occur in cartilaginous fish. Formerly the Monogenea were included in Trematoda on the basis that they are also vermiform parasites, but modern phylogenetic studies have raised this group to the status of a sister class in the Platyhelminthes, with the Cestoda.

Adult flukes are leaf-shaped flatworms. Prominent oral and ventral suckers help maintain position in situ. Flukes are hermaphroditic except for blood flukes, which are bisexual. The life-cycle includes a snail intermediate host.

* The Rediae also forms inside the snail first intermediate host and feeds through a developed pharynx. Either the rediae or the sporocyst develops into the cercariae through polyembrony in the snail.
* The cercariae are adapted for dispersal in space and exhibit a large variety in morphology. They are adapted to recognise and penetrate the second intermediate host, and contain behavioural and physiological adaptations not present in earlier life stages.
* The metacercariae are an adapted cystic form dormant in the secondary intermediate host.
* The adult is the fully developed form which infects the definitive host.