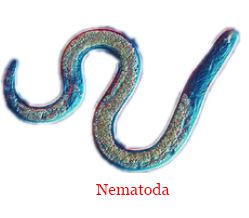 The nematodes or roundworms constitute the phylum Nematoda. They are a diverse animal phylum inhabiting a very broad range of environments. Nematode species can be difficult to distinguish, and although over 25,000 have been described, of which more than half are parasitic, the total number of nematode species has been estimated to be about 1 million. Unlike cnidarians and flatworms, nematodes have tubular digestive systems with openings at both ends.

Nematodes have successfully adapted to nearly every ecosystem from marine (salt water) to fresh water, to soils, and from the polar region to the tropics, as well as the highest to the lowest of elevations. They are ubiquitous in freshwater, marine, and terrestrial environments, where they often outnumber other animals in both individual and species counts, and are found in locations as diverse as mountains, deserts and oceanic trenches. They are found in every part of the earth's lithosphere. They represent, for example, 90% of all life forms on the ocean floor. Nematodes have even been found at great depth (0.9 – 3.6 km) below the surface of the Earth in gold mines in South Africa. Their numerical dominance, often exceeding a million individuals per square meter and accounting for about 80% of all individual animals on the earth, diversity of life cycles of Nematoda and their presence at various trophic levels point at an important role in many ecosystems.