a. Hemophilia:
Hemophilia is a rare bleeding disorder in which the blood doesn't clot normally. Hemophilia usually is inherited. "Inherited" means that the disorder is passed from parents to children through genes.

Preventive Exercise:
It is recommended that people affected with haemophilia do specific exercises to strengthen the joints, particularly the elbows, knees, and ankles. Exercises include elements which increase flexibility, tone, and strength of muscles, increasing their ability to protect joints from damaging bleeds. These exercises are recommended after an internal bleed occurs and on a daily basis to strengthen the muscles and joints to prevent new bleeding problems. Many recommended exercises include standard sports warm-up and training exercises such as stretching of the calves, ankle circles, elbow flexions, and quadriceps sets. 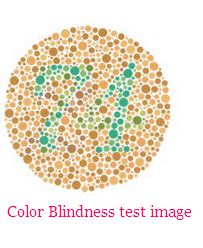 Color blindness, or color vision deficiency, is the decreased ability or inability to see color, or perceive color differences, under normal lighting conditions. Color blindness affects a significant percentage of the population. There is no actual blindness but there is a deficiency of color vision. The most usual cause is a fault in the development of one or more sets of retinal cones that perceive color in light and transmit that information to the optic nerve. This type of color blindness is usually a sex-linked condition. The genes that produce photo pigments are carried on the X chromosome; if some of these genes are missing or damaged, color blindness will be expressed in males with a higher probability than in females because males only have one X chromosome, whereas females have two and a functional gene on only one of the X chromosomes is sufficient to yield the necessary photo pigments.

Causes:
Color blindness can be inherited. It is most commonly inherited from mutations on the X chromosome but the mapping of the human genome has shown there are many causative mutations mutations capable of causing color blindness originate from at least 19 different chromosomes and 56 different genes. Two of the most common inherited forms of color blindness are protanopia and deuteranopia. One of the common color vision defects is red-green deficiency which is present in about 8 percent of males and 0.5 percent of females of Northern European ancestry.
Other causes of color blindness include brain or retinal damage caused by shaken baby syndrome, accidents and other trauma which produce swelling of the brain in the occipital lobe, and damage to the retina caused by exposure to ultraviolet light (10–300 nm). Damage often presents itself later on in life. Color blindness may also present itself in the spectrum of degenerative diseases of the eye, such as age-related macular degeneration, and as part of the retinal damage caused by diabetes. Another factor that may affect color blindness includes a deficiency in Vitamin A. 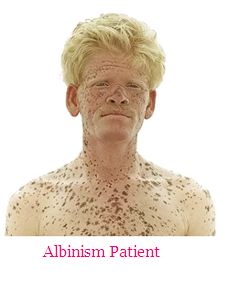 Albinism in humans is a congenital disorder characterized by the complete or partial absence of pigment in the skin, hair and eyes due to absence or defect of tyrosinase, a copper-containing enzyme involved in the production of melanin. It is the opposite of melanism. Unlike humans, other animals have multiple pigments and for these, albinism is considered to be a hereditary condition characterised by the absence of pigment in the eyes, skin, hair, scales, feathers or cuticle.

In humans, there are two principal types of albinism:
i. Oculocutaneous - Most people with oculocutaneous albinism appear white or very pale, as the melanin pigments responsible for brown, black, and some yellow colorations are not present. Ocular albinism results in light blue eyes, and may require genetic testing to diagnose. Because individuals with albinism have skin that entirely lacks the dark pigment melanin, which helps protect the skin from the sun's ultraviolet radiation, their skin can burn more easily from overexposure.
ii. Ocular: It affecting the eyes only.

d. Thalassemia:
Thalassemia is a genetic blood disorder. People with Thalassemia disease are not able to make enough hemoglobin, which causes severe anemia. Hemoglobin is found in red blood cells and carries oxygen to all parts of the body. When there is not enough hemoglobin in the red blood cells, oxygen cannot get to all parts of the body. Organs then become starved for oxygen and are unable to function properly.

There are two primary types of Thalassemia disease:

ii. Beta Thalassemia disease:
Beta Thalassemia Major (also called Cooley's Anemia) is a serious illness. Symptoms appear in the first two years of life and include paleness of the skin, poor appetite, irritability, and failure to grow. Proper treatment includes routine blood transfusions and other therapies.
The thalassemias are a diverse group of genetic blood diseases characterized by absent or decreased production of normal hemoglobin, resulting in a microcytic anemia of varying degree. The thalassemias have a distribution concomitant with areas where P. falciparum malaria is common. The alpha thalassemias are concentrated in Southeast Asia, Malaysia, and southern China.

The beta thalassemias are seen primarily in the areas surrounding Mediterranean Sea, Africa and Southeast Asia. Due to global migration patterns, there has been an increase in the incidence of thalassemia in North America in the last ten years, primarily due to immigration from Southeast Asia.

e. Alkaptonuria:
Alkaptonuria is a rare inherited disorder that occurs due to deficiency of homogentisic acid oxidase, resulting in the triad of dark-colored urine, ochronosis, and ochronotic arthropathy. Life expectancy is usually normal. The incidence of alkaptonuria is 1 in 250000 to 1 in 1000000 live births. Only a few cases have been reported from India.

Symptoms:
Patients with alkaptonuria are asymptomatic as children or young adults, but their urine may turn brown or even inky black if collected and left exposed to open air. Pigmentation may be noted in the sclera of the eye and the cartilage of the ear as well as other cartilage. After the age of thirty people begin to develop pain in the weight-bearing joints of the spine, hips and knees. The pain can be severe to the point that interferes with activities of daily living and may affect ability to work. Joint replacement surgery (hip and shoulder) is often necessary at a relatively young age. In the longer term, the involvement of the spinal joints leads to reduced movement of the rib cage and can affect breathing. Bone mineral density may be affected, increasing the risk of bone fractures, and rupture of tendons and muscles may occur. 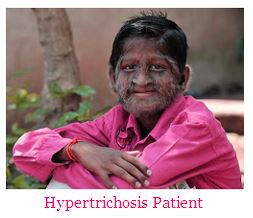 The excess growth of hair occurs in areas of the skin with the exception of androgen-dependent hair of the pubic area, face, and axillary regions.