Seven Wonders of the Ancient World

In order to avoid any damaging confusion, UNESCO wishes to reaffirm that there is no link whatsoever between UNESCO's World Heritage programme, which aims to protect world heritage, and the current campaign concerning "The New 7 Wonders of the World". 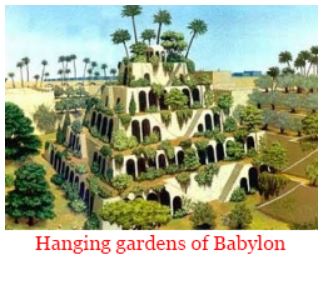 * The city of Babylon, under King Nebuchadnezzar II, must have been a wonder to the ancient traveller’s eyes. "In addition to its size," wrote Herodotus, a Greek historian in 450 BC, "Babylon surpasses in splendour any city in the known world."
* Herodotus claimed the outer walls were 56 miles in length, 80 feet thick and 320 feet high. Wide enough, he said, to allow two four-horse chariots to pass each other. The city also had inner walls which were "not so thick as the first, but hardly less strong." Inside these double walls were fortresses and temples containing immense statues of solid gold. Rising above the city was the famous Tower of Babel, a temple to the god Marduk, that seemed to reach to the heavens.

Location: City State of Babylon (Modern Iraq)
Built: Around 600 BC
Function: Royal Gardens
Destroyed: Earthquake, 2nd Century BC
* While archaeological excavations have disputed some of Herodotus's claims (the outer walls seem to be only 10 miles long and not nearly as high) his narrative does give us a sense of how awesome the features of the city appeared to those ancients that visited it.
* Strangely, however, one of the city's most spectacular sites is not even mentioned by Herodotus: The Hanging Gardens of Babylon, one of the Seven Wonders of the Ancient World.

Statue of Zeus at Olympia: 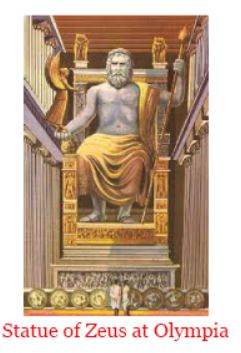 * The Statue of Zeus at Olympia was a giant seated figure, about 42 ft (13 m) tall made by the Greek sculptor Phidias around 435 BC at the sanctuary of Olympia, Greece, and erected in the Temple of Zeus there.
* A sculpture of ivory plates and gold panels over a wooden framework, it represented the god Zeus sitting on an elaborate cedar wood throne ornamented with ebony, ivory, gold and precious stones.
* It was regarded as one of the Seven Wonders of the Ancient World until its eventual loss and destruction during the 5th century AD. No copy of the statue has ever been found, and details of its form are known only from ancient Greek descriptions and representations on coins. 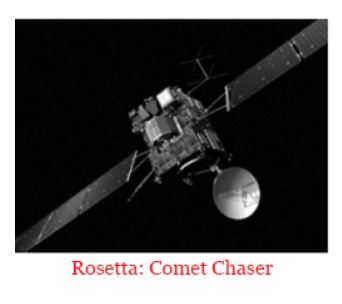 * There are 138 pyramids discovered in Egypt as of 2008. Most were built as tombs for the country's Pharaohs and their consorts during the old and middle Kingdom periods.
* The earliest known Egyptian pyramids are found at Saqqara, northwest of Memphis. The earliest among these is the Pyramid of Djoser (constructed 2630 BC–2611 BC) which was built during the third dynasty.
* This pyramid and its surrounding complex were designed by the architect Imhotep, and are generally considered to be the world's oldest monumental structures constructed of dressed masonry.
* The estimate of the number of workers to build the pyramids range from a few thousand, twenty thousand, and up to 100,000.
* The most famous Egyptian pyramids are those found at Giza, on the outskirts of Cairo. Several of the Giza pyramids are counted among the largest structures ever built. The Pyramid of Khufu at Giza is the largest Egyptian pyramid.
* It is the only one of the Seven Wonders of the Ancient World still in existence.

* The Mausoleum at Halicarnassus or Tomb of Mausolus was a tomb built between 353 and 350 BC at Halicarnassus (present Bodrum, Turkey) for Mausolus, a satrap in the Persian Empire, and Artemisia II of Caria, who was both his wife and his sister. The structure was designed by the Greek architects Satyros and Pythius of Priene.
* The Mausoleum was approximately 45 m (148 ft) in height, and the four sides were adorned with sculptural reliefs, each created by one of four Greek sculptors—Leochares, Bryaxis, Scopas of Paros and Timotheus.
* The finished structure of the mausoleum was considered to be such an aesthetic triumph that Antipater of Sidon identified it as one of his Seven Wonders of the Ancient World. It was destroyed by successive earthquakes from the 12th to the 15th century. The word mausoleum has now come to be used generically for an above-ground tomb.

* The Lighthouse of Alexandria, sometimes called the Pharos of Alexandria was a lofty tower built by the Ptolemaic Kingdom between 280 and 247 BC and between 393 and 450 ft tall.                                                * It was one of the tallest man-made structures on Earth for many centuries, and was regarded as one of the Seven Wonders of the Ancient World. Badly damaged by three earthquakes between 956 and 1323, it then became an abandoned ruin. It was the third longest surviving ancient wonder (after the Mausoleum at Halicarnassus and the still extant Great Pyramid of Giza) until in 1480 the last of its remnant stones were used to build the Citadel of Qaitbay on the site.
* In 1994, French archaeologists discovered some remains of the lighthouse on the floor of Alexandria's Eastern Harbour. 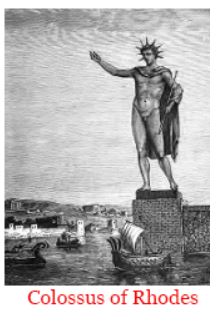 Colossus of Rhodes:
* The Colossus of Rhodes was a statue of the Greek titan-god of the sun Helios, erected in the city of Rhodes, on the Greek island of the same name, by Chares of Lindos in 280 BC. It is considered one of the Seven Wonders of the Ancient World.
* It was constructed to celebrate Rhodes' victory over the ruler of Cyprus, Antigonus I Monophthalmus, whose son unsuccessfully besieged Rhodes in 305 BC. Before its destruction in the earthquake of 226 BC, the Colossus of Rhodes stood over 30 meters high, making it one of the tallest statues of the ancient world.

The Temple of Diana at Emphuses 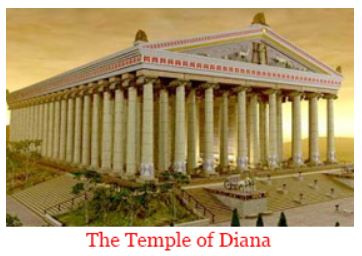 * The Temple of Diana in ancient Rome was a Roman temple which, according to the early semi-legendary history of Rome, was built in the 6th century BC during the reign of the king Servius Tullius. According to Livy, word had come to Rome of the new and glorious temple of Artemis at Ephesus, and it was told that the temple had been constructed through the combined effort of the cities of Asia Minor.                 * The king of Rome, Servius Tullius, extolled the virtues of such an act of concord to the cities of the Latins, and convinced them to work with the Roman people to build a temple to Diana in Rome. The temple was built upon the Aventine Hill.
* Soon after the construction of the temple, a cow of remarkable beauty and size was born to the head of a Sabine family. It was foretold by the augurs that sovereignty would come to the city whose citizen sacrificed the cow to Diana.
* Accordingly, the Sabine man took the cow to the temple of Diana in Rome, and led her to the altar. However, before he could sacrifice her, the Roman priest of the temple confronted him, and asked whether he would make the sacrifice with impure hands, imploring the man to go and cleanse his hands in the Tiber.
* Once the Sabine had left the temple to go to the Tiber, the priest immediately sacrificed the cow, to the great satisfaction of Rome and its king. Later temple dedications often took as their model the ritual formulas and cult regulations devised for the Temple of Diana on the Aventine.